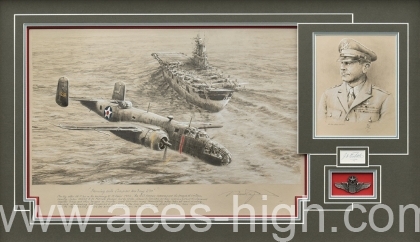 Intrepid Pioneer, Record Breaker, Award Winner, Outstanding Aeronautical Engineer or Celebrated Commander could all describe the man Robert Taylor has chosen as the latest figure to feature in his ground-breaking Icons of Flight series. That figure is General Jimmy Doolittle – best known as the man who led the famous first raid on Tokyo during WWII for which he was awarded the Medal of Honor.

Few aviators have had such an impact on the history of flight as Jimmy Doolittle – the first man to fly coast-to-coast across America in a day, awarded a doctorate in aeronautical engineering, winner of the Schneider Trophy, world speed record holder, a pioneer of instrument-flying and, during the war, Commander of the Eighth Air Force in Europe. A list of all of his many achievements could fill a page but the feat for which he is best known is that heroic raid he led on Tokyo, America’s first strike on mainland Japan shortly after the infamous attack on Pearl Harbor.

The centrepiece of Robert’s portfolio is therefore a fitting tribute, skilfully depicting Doolittle’s B-25 shortly after launch from the pitching deck of USS Hornet on 18 April 1942. Beautifully matted within the composition is a separate portrait specially created by Robert for the occasion.

Both drawings have been created as Giclée prints by a top English master printer and lovingly reproduced on museum quality archival papers. It’s what happens next where the real magic takes place; Robert personally takes charge of proceedings, transforming each Giclée proof into a unique work of art through the application of subtle embellishments, elegant highlights and tonal applications of muted colour wash. Only when Robert is entirely satisfied with the finished result, does he personally title and write the captions before signing and hand-numbering each copy.

Only 20 copies of this memorable edition are available worldwide. Each pair of drawings is exquisitely matted to full conservation standards in a single composition that includes reproduction Command Pilot Wings and the RARE and fully authenticated original autograph of the man himself; General JAMES H. ‘JIMMY’ DOOLITTLE MoH.

To complete the portfolio, each compilation is accompanied by a matching-numbered biographical book specially written for this release which is beautifully illustrated by Robert Taylor and his talented son, Richard.