THE LEGEND OF COLIN KELLY 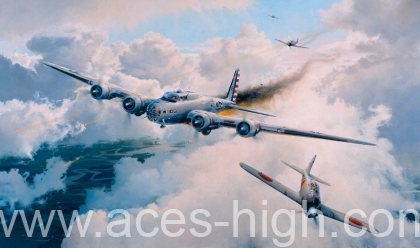 In the dark days after the Japanese attack on Pearl Harbor, American forces fought back against an overwhelming Japanese onslaught, with obsolete aircraft and equipment. With minimal resources and no hope of reinforcement, they fought a desperate, losing battle, hoping to buy a little time for the United States and her allies in the Pacific. As the Japanese advanced through the Phillipines, U.S. airmen and soldiers fought until they surrendered or were destroyed. Their valiant sacrifice is still remembered today.

Representative of their valor was a young B-17 pilot, Captain Colin Kelly, who, with a handful of others, flew the first American bombing missions of World War II. Three days after Pearl Harbor, with Clark Field under air attack, he made an emergency takeoff with three 600-pound bombs aboard. He located several Japanese cruisers shelling a landing area near Aparri. Kelly's plane bombed from 22,000 feet, amazingly, hitting a cruiser. On the way back to Clark, he and his crew were attacked by a squadron of Japanese Zeros led by top ace Saburo Sakai. They raked the Fortress from the rear in a running battle for several dozen miles, killing the waist gunner and injuring others. As the crippled ship began to fall to earth, Kelly held the controls steady while the others bailed out. As the sixth man left the ship, it blew up. His was the first B-17 lost in combat; Kelly was awarded the Distinguished Service Cross.

Robert Taylor has painted a masterpiece of this event; the resulting print edition is the only one by a major aviation artist and the only one signed by the surviving members of Kelly's crew. It comes with a color companion print personally signed by Saburo Sakai. If you previously purchased Taylor's "Remember Pearl Harbor" or wish to acquire it, matching numbered sets are available for a limited time. Call or e-mail us right away to place your order for this unique comemoration of the first American hero of World War II.

The two surviving members of Captain Colin P. Kelly's B-17C crew have each hand-signed every print in the edition in pencil together with the artist Robert Taylor, to authenticate the most realistic portrayal of events ever painted of that fateful day, December 10, 1941.