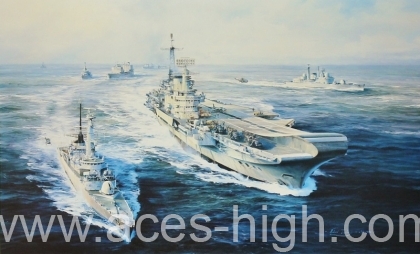 Within days of Argentine forces invading and occupying the Falkland Islands, the British had dispatched a hastily assembled Task Force to the south Atlantic. Their mission was simple but dangerous: they must retake the islands. And just 74 days later, on 14 June 1982, that’s exactly what they achieved when the last of the Argentine garrison surrendered to Major General Jeremy Moore RM, Commander of the British Land Forces.

Three decades later, the monumental battle to retake the islands still resonates and this well-known piece by Robert Taylor, painted shortly after the event, encapsulates the scene as just one part of the Task Force heads into the south Atlantic. The flagship, HMS Hermes, prepares to launch her Sea Harriers whilst a Sea King stands off. The frigate HMS Arrow, in the foreground, ploughs into the swell, whilst the Type 42 destroyer HMS Sheffield keeps station off the port beam. Following are the destroyer HMS Glamorgan, the RFA Olna, a Fleet Auxiliary tanker and the RFA Resource, a munitions and stores supply vessel.

Few paintings so aptly sum up the Task Force so well; this is one for all collectors with a historical interest in this resourceful and brilliantly conducted military campaign.

Each print in the edition has been personally signed by the artist and by:

Matted to full conservation standards to include the original autograph of the Commanding Officer of 820 (Sea King) Squadron, Fleet Air Arm: