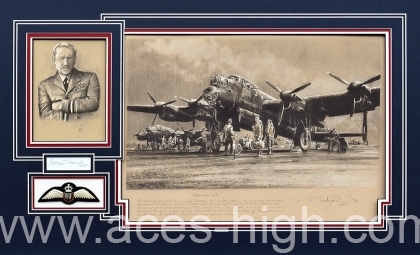 In February 1942 Air Marshal Arthur ‘Bomber’ Harris was appointed the new Air Officer Commanding-in-Chief Bomber Command. Determined, single-minded, the current commander of 5 Group and a veteran airman who’d led a front-line squadron in the First World War, Harris’s task was to inject a new impetus into a bomber offensive that would shatter German industry – and morale. If he could achieve his objectives, Harris would ultimately become the architect and mastermind behind the RAF’s successful strategic bombing offensive against Germany.

Robert Taylor has chosen Sir Arthur, a man he knew and met on several occasions, as the latest figure to feature in his ground- breaking Icons of Flight series. Fortuitously Harris’s appointment coincided with the introduction of the mighty Avro Lancaster and it’s no surprise that Robert has depicted a Lancaster, which Harris later described as ‘the finest bomber of the war!’, to feature as the centrepiece of this memorable compilation in Operations On. This stunning new drawing echoes the famous painting originally commissioned and presented to Sir Arthur at the Bomber Command Reunion in 1982 and now regarded as an all-time classic in Robert’s extensive back-catalogue.

Beautifully matted alongside is a separate matching-numbered piece – a portrait of the famous man himself specially created by Robert for the occasion.

Both drawings have been meticulously created as Giclée proofs by one of the top English master print-makers and reproduced on museum quality archival papers. What happens next is where the real magic takes place; Robert personally takes charge of proceedings, transforming each Giclée proof into a unique work of art through the application of subtle embellishments, elegant highlights and tonal applications of muted colour wash. Only when Robert is entirely satisfied with the finished result, does he personally title and write the captions before signing and hand-numbering each copy.

Only 25 of this memorable edition are available worldwide. Each pair of drawings is professionally matted to full conservation standards in a single composition that includes museum-quality reproduction RAF King Crown Wings and an ORIGINAL and fully authenticated autograph of the legendary leader depicted which have been sourced and collected over a number of years:

But that isn’t all – to complete the portfolio, accompanying the matted compilation is a copy of a matching-numbered book ‘THE AVRO LANCASTER in Air Combat Paintings by Robert Taylor’, specially written and created for the release.