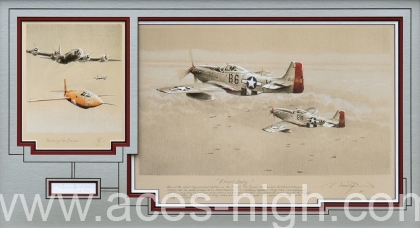 Continuing the runaway success of his Icons of Flight series, for this next release Robert Taylor has chosen to portray legendary aviator ‘Chuck’ Yeager – the first man in history to fly faster than the speed of sound. With the series dedicated to some of the most famous aviators in history, Chuck Yeager ranks high among the contenders having become one of America’s most famous P-51 Aces during World War II. He then went on to lead a glittering career as one of the world’s top test pilots – the highlight of which occurred on 14 October 1947 when he became the first man in history to break the sound barrier.

Following the theme of previous releases in his ground-breaking series, a detailed drawing titled Escort Duty forms the centrepiece of this highly-restricted new compilation; it features Yeager’s most famous P-51 ‘Glamorous Glen III’, the mount in which he scored most of his World War II victories, including the five Bf109s shot down in a single mission on 12 October 1944 and the four Fw190s downed on 27 November 1944. Matted alongside is a second, completely separate drawing titled Breaking the Barrier which features Yeager’s Bell X-IA rocket plane moments into its record-breaking journey.

Continuing the meticulous standards set in the series so far, both drawings are once again beautifully presented as Giclée prints, reproduced on museum quality archival papers to the highest standards of certified digital print-making. What happens next, however, is at the heart of this new series as Robert lovingly hand-finishes each copy to create a truly unique and highly-collectible item.

The process he uses to transform each piece is tantalising with the delicate application of subtle embellishments, elegant highlights and the refined tonal application of muted colour washes. Every copy is therefore unique and only when Robert is completely satisfied with the finished result, does he personally title and write the captions before signing and hand-numbering each copy.

Only 26 copies of this memorable edition are available worldwide. Each pair of drawings is exquisitely matted to full conservation standards in a single composition that includes the RARE and fully authenticated original autograph of the man himself; Brigadier General CHARLES E. ‘CHUCK’ YEAGER.

To complete the portfolio, each copy is issued with a specially-written and unique matching-numbered biographical book illustrated by Robert Taylor and his son, Richard Taylor. Containing many previously unseen works, the book follows Chuck Yeager’s fascinating life story from his birth and childhood in West Virginia, through his time with the 357th Fighter Group in World War II, his epoch-making career as one of America’s foremost test pilots of all time, to his later commands and tours of duty in south-east Asia.