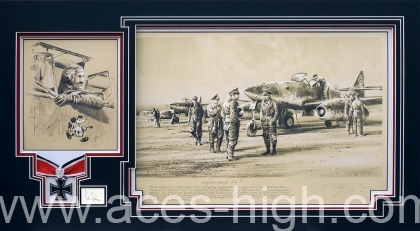 It isn’t often that a new series has had such an immediate impact as Robert Taylor’s Icons of Flight, with each of the three previous releases selling out within days of publication. Dedicated to some of the most famous aviators of the First and Second World Wars, these ground-breaking compilation artworks are novel in both inspiration and execution.

With the name Robert Taylor remaining unchallenged as the undisputed master of the genre he helped to create, few artists possess Robert’s undisputed personal relationship with the many distinguished combat aviators who flew and fought in those major air campaigns of the twentieth century. One of the most famous is the subject of Robert’s memorable release – Adolf ‘Dolfo’ Galland – unquestionably the greatest fighter leader in the Luftwaffe and one highly respected by his Allied opponents.

Through the many years that Robert and Dolfo knew one another, Dolfo was able to impart a wealth of information not only on a technical level but on the difficulties encountered whilst serving in Hitler’s air force. His relationship with Luftwaffe supremo Hermann Goering had been testy ever since the Battle of Britain and, never afraid of speaking his mind, his outspoken clashes with Goering were numerous. Matters finally came to a head in January 1945 when Dolfo was sacked for insubordination. Banished from German High Command, Dolfo set about forming his own elite unit equipped with Me262 jet fighters – ‘ Jagdverband 44’ – the unit depicted in the new drawing that forms the centrepiece of Robert’s new Icons of Flight compilation.

Matted alongside it is a separate piece featuring Dolfo in the cockpit of his Bf109 during the Battle of Britain.

Both drawings in this highly-restricted edition are reproduced by one of Europe’s leading Giclée printers with output to the highest standards of certified digital print-making and lovingly reproduced on museum quality archival papers. What happens next, however, is at the heart of this new series. Robert personally takes over proceedings, transforming each proof into a unique work through the application of subtle embellishments, elegant highlights and refined tonal application of muted colour washes. Only then, when he is entirely satisfied with the finished result, does Robert personally title and write the captions before signing and hand-numbering each copy.

Only 26 copies of this memorable print and book portfolio are available worldwide, in recognition of his outstanding leadership of one of the Luftwaffe’s most revered units, JG26. Each pair of drawings is artistically matted to full conservation standards in a single composition that includes an ORIGINAL and fully authenticated autograph of the man himself, together with a museum-quality reproduction of his Knight’s Cross with Oak Leaves, Swords and Diamonds:

The portfolio is completed with a matching-numbered biographical book specially written for this release which, beautifully illustrated by Robert Taylor, describes Dolfo’s life story from childhood, through his time in Spain and World War II, to his later years.