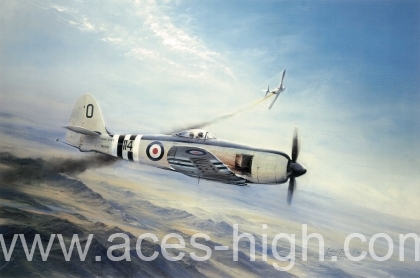 It's believed to be the first recorded victory of a piston-engined aircraft over a jet fighter in the Korean War.

Each print is individually hand signed by artist Robert Taylor and famous pilot who lead the flight:

Originally published in 1985 it was thought at the time that Carmichael scored the first recorded victory of a piston-engine fighter over a jet fighter in the Korean War.

Since then, new research has now credited this victory to one of Carmichael's fellow Royal Navy pilots who was flying with him that day.

Featuring the signature listed on the Limited Edition plus the additional matted signature of the Royal Navy veteran who scored the Ace: