EAGLES OVER THE RHINE 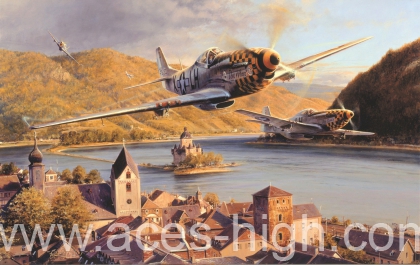 The arrival of the USAAF in Europe in 1942 was a turning point in WWII. One of the aircraft that came to symbolise the accomplishments of the men and machines of the American Air Forces during this time was the P-51 Mustang, arguably the best all-round fighter of WWII.

This iconic print released to commemorate the 50th anniversary of the air victory in Europe depicts P-51 Mustangs of the 353rd Fighter Group make a low-level celebratory run over towns and villages along the Rhine. Below them, the ancient town of Kaub, south of Remagen, appears untouched by the traumatic events of recent years.

Eagles Over The Rhine has long been sold out and much sought after on the secondary market. A great addition to any collection.

Each print is personally signed by five of the most distinguished Fighter Aces of WWII:

Four print set including EAGLES OVER THE RHINE, WIDE HORIZONS, OUT OF FUEL AND SAFTELY HOME  and issued with the matted companion print: JIMMY DOOLITTLE.