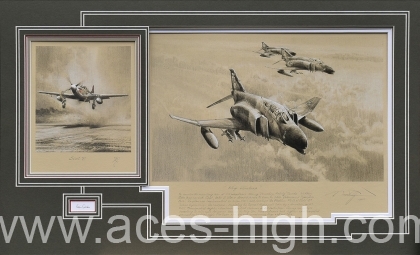 Robert Taylor’s Icons of Flight series features some of the most famous aviators of the First and Second World Wars. It continues to prove a runaway success and has become one of the most popular collector compilations published in recent years with many of the previous editions selling out within a matter of days of publication – unsurprising, perhaps, given that Robert is not only the undisputed master of his genre but remains the most widely-collected aviation artist in the world.

The latest ‘icon’ to feature in Robert’s series is one of the most charismatic, highly-regarded aviators of his generation. His name is Robin Olds.

In a military career that stretched over 30 years, the breadth of Robin Olds’ combat service was long and his achievements remarkable. He retired as a ‘triple-ace’ who flew some of the great piston-engine classic fighters of World War Two, where he achieved thirteen air victories, before transitioning to one of the world’s most iconic fast jets, the F4 Phantom, in Vietnam, adding another four victories to his score.

Robin and Robert became lifelong friends with a deep, mutual respect for each other’s skill. ‘I profess no special talent,’ Olds modestly wrote in 2000, ‘nor even a smidgen of education in the field of illustration, but I will hold Robert forever in the forefront of artistry. His talent reaches into our hearts and minds with an emotional impact equalled by very few.’ A talent that has carried over in MiG Hunters, Robert’s dazzling depiction of his friend’s F4 Phantom in Vietnam, and the drawing that forms the centrepiece of his latest compilation.

The story behind MiG Hunters amounts to the culmination of Olds’ career during the war in Vietnam when as Commanding Officer of the USAF 8th Tactical Fighter Wing – The Wolf Pack, whose F-4 Phantoms were based at Ubon in Thailand, he devised a plan to counter the mounting losses of U.S. warplanes during Operation ‘Rolling Thunder’ and even the odds. Codenamed Operation ‘Bolo’, the ruse was implemented on 2 January 1967 and involved Olds’ Phantoms simulating the typical flight path and formation taken by F- 105 Thunderchief fighter-bombers. The North Vietnamese fell for the trap. Coming up in force expecting to intercept American bombers the MiG-21s, North Vietnam’s best fighter, were themselves pounced on by Olds’ agile Phantoms who downed seven enemy MiGs without loss.

Matted alongside MiG Hunters is a completely separate yet matching-numbered study of Robin’s P-51 Mustang Scat VI in which he scored three aerial victories during World War Two.

Both drawings have been meticulously reproduced as high quality fine art Giclée prints on museum quality archival velvet paper. It’s the next step that marks these particular Giclée prints out as revolutionary – it’s now Robert Taylor who takes charge of proceedings, transforming each print into an individual work of art through the delicate application of subtle embellishments, elegant highlights and refined tonal applications of muted colour wash. Only then, when he is entirely satisfied with the finished result, does Robert title and caption each work before signing and hand-numbering each of these individual and unique pieces.

Only 25 of this memorable edition are available worldwide. Each pair of drawings is exquisitely matted to full conservation standards in a single composition that includes an ORIGINAL and fully-authenticated autograph of the legendary man himself;

To complete the portfolio, each compilation is accompanied by a matching-numbered biographical book specially written for the occasion which is beautifully illustrated by Robert Taylor and his talented son, Richard. Containing several previously unseen works, the book follows Robin’s fascinating life story from his birth in Honolulu and time at West Point, through the Second World War, into the jet age and his time in Vietnam.