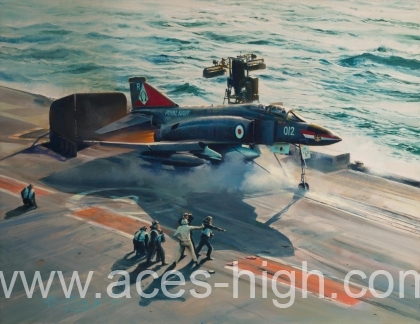 With a tradition dating back to the early years of military flying, the Royal Navy has a proud and distinguished association with air combat. Fifty-six Fleet Air Arm pilots took part in the Battle of Britain, four of them becoming Aces, and in November 1940, twenty-one Fleet Air Arm Swordfish bi-planes flew off the deck of HMS Illustrious to destroy the heart of the Italian Fleet at Taranto – the first carrier-based attack in history which, much admired for its skill and audacity, was copied by the Japanese at Pearl Harbor. Then, in May 1941, Swordfish from HMS Ark Royal had crippled the German battleship Bismarck, leading to her destruction under the guns of the Home Fleet. The Fleet Air Arm would serve with distinction in all the major theatres of the Second World War including the north Atlantic, Mediterranean and the Far East. They invented the armoured flight deck, and their highest-scoring fighter Ace, Cdr Stanley Orr, notched up an impressive 17 victories. By the end of hostilities in 1945 the Fleet Air Arm possessed a force of some 3,700 aircraft operating from a fleet of 59 carriers.

After the war the Royal Navy was instrumental in pioneering the steam-powered catapult, angled flight decks and optical landing systems, all adopted by the huge carriers of the U.S. Navy. In 1978, however, after seventy-five years of operations, the use of fixed-wing aircraft by the Royal Navy came to an end, their magnificent McDonnell Douglas Phantom jets handed over to the RAF.

HMS Ark Royal (R-09), meanwhile, at that time the last of a long line of famous conventional British carriers, would soon be decommissioned and Robert Taylor, then a young artist bursting on to the scene, was asked to paint a scene commemorate the occasion; his piece HMS Ark Royal became the best-selling print of the year. Whilst working on his commission Robert created a small painting for his own personal collection; it featured the moment when pilot Flt Lt Murdo MacLeod RAF with Lt. Dennis McCallum RN in the back seat, flying F4-K Phantom XT870/R-012 of 892 Naval Air Squadron became the last fixed wing aircraft to be launched from the deck of Ark Royal, and the last time a Phantom flew with the Fleet Air Arm.

In memory of that last fixed-wing carrier launch we are delighted to not only reproduce this historically important work as a limited edition print, but each copy has been endorsed by the pilot of the Phantom on that memorable occasion.

Adding great provenance, along with artist Robert Taylor the edition has been personally autographed by the highly-regarded RAF pilot who flew Phantom XT870/R-012 on the date depicted in Robert’s piece, and later went on to serve with the Royal Navy:

Murdo MacLeod joined the RAF in 1971 and flew English Electric Lightning aircraft with 29, 23 and 56 Squadrons, based at RAF Wattisham and Leuchars before an exchange tour flying Phantoms with the Royal Navy’s 892 NAS. On his return to the RAF he converted to the Harrier GR.3. In 1982, flying one of two Harriers at the start of the Falklands campaign from Ascension to HMS Hermes codenamed ‘Operation Bowsprit’, refuelling six times during the 3,600 mile flight, to act as reinforcement for operations against Argentinian forces in the Falkland Islands. Murdo flew a number of Harrier GR.3 sorties over the Falklands from HMS Hermes and continued to fly the Harrier after the war and his return to the UK. He left the RAF in 1989 to become an airline pilot.