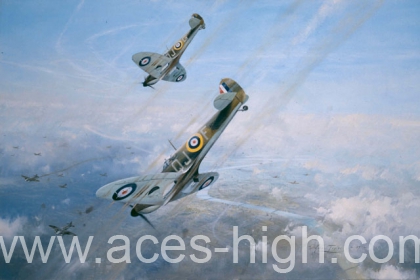 “During this time I led 92 on sixty-odd operations and the squadron achieved the highest success rate of any Squadron in the Battle of Britain. After Dunkirk we’d moved to South Wales, partly for a rest and partly to look after the West Country ports and installations.
We moved back to Biggin Hill at the end of August when I became 92’s acting Commanding Officer, a position I held for the next six weeks until a bullet in the leg put me in hospital.”
Group Captain Brian Kingcome DSO DFC*

In this classic Robert Taylor painting Brian Kingcome is seen leading the Spitfires of 92 Squadron in a diving attack into a force of HeIII’s over the city of London during the height of the Battle of Britain. Brian Kingcome flew Spitfires operationally virtually without break for the duration of the war and finished a highly decorated Ace with 8 and 3 shared victories to his credit.

Every print in this edition has been signed by the artist Robert Taylor along with one of the most highly-respected Spitfire Pilots of WWII: