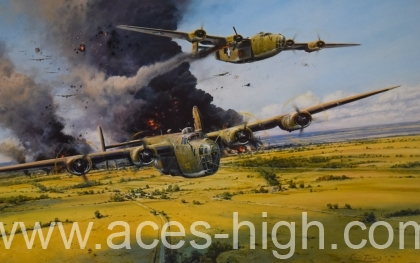 In a moving 50th Anniversary tribute to the 1700 intrepid aircrew who flew the epic Ploesti Raid, the world's foremost aviation artist, Robert Taylor, has created a masterpiece in air combat art. As Suzy Q emerges from the maelstrom, with 44th Bomb Group Commander Leon Johnson clearly visible in the co-pilot's seat, the gripping spectacle of that historic raid is brought to life with vivid, awesome realty.

This award winning print sold out immediately and has been a very rare and highly desired piece in the secondary market since.

Each print is signed by FIVE distinguished B-24 pilots, each representing one of the five USAAF Bomb Groups who flew the mighty Ploesti mission.

50 Publisher Proofs were published with matching numbered prints of ONE OF THE LUCKY ONES, reproduced from Robert Taylor's original pencil drawing showing a B-24 crew having just returned from the epic Ploesti raid.  Each companion print (measuring 25"x18") has been signed by significant personnel who played a vital role in the success of the Ploesti mission.