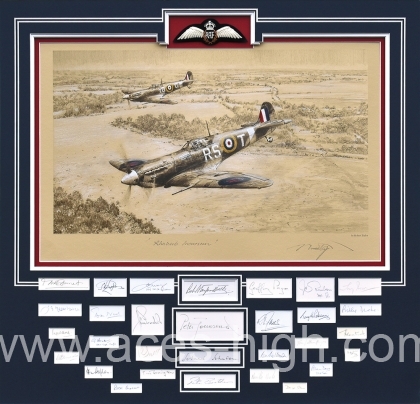 - A TRIBUTE TO THE MEN OF RAF FIGHTER COMMAND -

The Battle of Britain ‘officially’ ended on 30 October 1940 and the Luftwaffe’s attempt to eradicate Fighter Command had ended in failure. Winston Churchill’s famous ‘Few’ had defended Britain in a long series of intense engagements in which Hermann Göring‘s tactics had been tested, and found wanting. Now, with Hitler’s attentions focused on Russia, it was time for Fighter Command to seize the initiative and go on the offensive.

Taking the war into the enemy’s back yard brought new words into a pilot’s lexicon with names such as Rhubarbs – low-level incursions flown by two or three fighters to strafe, damage or destroy targets of opportunity on the ground; Rodeos – large scale high-flying sweeps hoping to lure enemy fighters into action; Roadsteads – low-level attacks on coastal shipping, and Circus – sweeps in which bomber formations, escorted by large numbers of fighters, were sent on raids that the Luftwaffe simply couldn’t ignore.

It’s one such Rhubarb operation that Robert Taylor has chosen in this superb Masterwork drawing, a fitting tribute to all the pilots of Fighter Command whose bravery, skill and airmanship helped bring about the downfall of Hitler and his evil Third Reich. The main Spitfire in the piece is that of Bob Stanford Tuck, hero of the Battle of Britain and high-scoring Ace who, in December 1941, became Leader of the Biggin Hill Wing. Robert portrays the Wing Commander and his wingman carrying out a Rhubarb Incursion over northern France. When faced with flak, however, Rhubarbs could be highly dangerous – shortly after the events depicted in the drawing, Tuck with a tally of 29 victories to his credit, was shot down in a barrage of ground fire and taken prisoner.

This is the latest in a number of high quality giclée fine art print editions by Robert such as ‘Camaraderie’ commemorating the Luftwaffe Fighter Aces of WWII and ‘The Rising Mist’ remembering the bomber crews of the U.S. Eighth Air Force. These highly restricted titles have quickly sold out and we’re sure this detailed piece in tribute to the men of RAF Fighter Command will be no different.

Adding great authenticity, each print is not only hand signed, numbered and personally titled by Robert, but exquisitely conservation matted to include museum-quality reproduction RAF wings plus the original signatures of THIRTY distinguished veterans who flew and fought with RAF Fighter Command during the Second World War, such as the famous Ace depicted, Robert Stanford Tuck.

Completing the portfolio is a mint copy of an exact facsimile edition of Stanford Tuck’s Flying Log Book.Issued in a specially produced presentation sleeve and accompanied by a numbered certificate of authenticity, this book has been restricted to very limited numbers worldwide and covers Stanford Tuck’s entire RAF career from 1935 to 1954.

Restricted to just TWENTY FIVE copies worldwide, each portfolio contains a copy of the Pilot’s Log Book along with a matching numbered print of ‘Rhubarb Incursion’, conservation matted to include the signatures of THIRTY highly regarded RAF Fighter Pilots who flew with distinction during WWII: