TOWARDS THE HOME FIRES 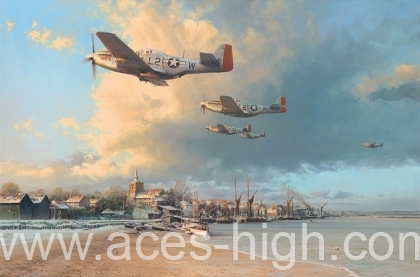 As the New Year of 1945 dawned, the snow had already spread to blanket the southern half of England with a cloak of frosty whiteness. The festivities of Christmas had passed and the relentless pounding of German cities and industrial targets continued unabated. On every front Hitler’s once-fabled armies were in full retreat. The endgame was now in play.

Recalling that final harsh winter of the war Robert Taylor has painted one of the finest scenes of his illustrious career in a stunning tribute to Robin Olds, one of the legendary Aces who took part in the great aerial assault launched on Germany by the US Eighth Air Force.

With dusk approaching, Robin Olds, flying his P-51K Scat VI, leads a flight of Mustangs of the 434th Fighter Squadron, 479th Fighter Group low over the historic estuary town of Maldon in Essex. The ancient wharves and quayside are a welcoming sight for the returning Mustang pilots as they head home to their base at Wattisham after an arduous eight-hour bomber escort mission on 14 February 1945. There is time enough for a low level flypast for the villagers below as Olds reflects on a mission that saw him add three German fighters to his tally in quick succession south of Berlin, making him one of the foremost Aces of the unit.

Destined to become one of Robert’s classic pieces, it is of great historical significance that Robin Olds has signed part of the edition. The prints are also autographed by pilots that flew alongside him on those arduous missions, giving even greater meaning to this new release and creating a remarkable and valuable collector’s piece.

Joining artist Robert Taylor in signing every print is a highly-distinguished fighter pilot who flew P-51s alongside Robin Olds:

Each print is additionally signed by the legendary Robin Olds along with a further P-51 pilot who flew with the 479th Fighter Group:

Each print in these EIGHT signature editions is signed by a further five famous P-51 Fighter Pilots, including another member of the 479th Fighter Group:

With all the signatures of the Mustang Pilots' Edition, each print is issued with an original, specially commissioned pencil drawing by Robert Taylor – each personally signed by five distinguished exponents of the P-51. These beautiful works of art have then been conservation matted to include the original signatures of a further five outstanding Aces who flew the P-51 in combat.