AIR APACHES ON THE WARPATH 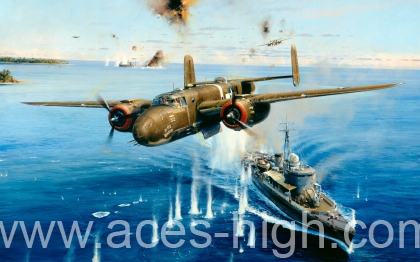 The date is February 16, 1944.  Intelligence has reported enemy shipping in the region of New Hanover, a large island west of New Ireland, and 41 strafers from the 345th have joined three squadrons of the 38th Bomb Group to hunt them down.  In the foreground the 500th Squadron's B-25, 'Rita's Wagon' having raked the 420-ton Japanese Subchaser No.39 with machinegun fire, has released a bomb which explodes near the stern, probably damaging the steering gear.  The air and water is alive with flying shrapnel.  A burst of flak from one of the ship's guns rocks the B-25 as it makes its diving pass just above the mastheard, and already there are signs of damage aboard the Subchaser.

Rapidly closing is the next assault as B-25 'Brother Rat' begins a diving attack which will send the hapless Subchaser, now out of control, onto a neaby reef.  The 499th B-25s, following up in the distance will roar in to finish the ship's destruction.  In the background, the 5460-ton tanker Sanko Maru explodes in flames to complete the success of the attacks by the 'Air Apaches.'

Each copy of Air Apaches on the Warpath is signed by FOUR leading 'Air Apache' pilots from the 345th Bomb Group: