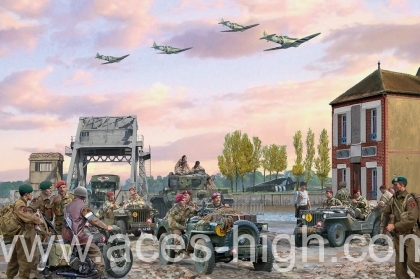 Commemorating D-Day and the Battle for Normandy

From the moment the Battle of Britain was over, the Allies had planned for the invasion that would liberate Europe from the tyranny of Hitler’s thuggish Reich. On 6 June 1944 those plans were put into practice on the beaches of Normandy when the world witnessed the largest amphibious landings ever seen. But before the vast Allied armies could storm ashore on D-Day, the flanks of the chosen 50- mile long beach-head had to be secured – and held. The task of seizing the left flank fell to the British 6th Airborne Division whose first objective was to capture the two Orne bridges that controlled access to Sword Beach.

Midnight had scarcely passed when three Horsa gliders swept out of the night to land within yards of the Bénouville Bridge over the Caen canal. Led by Major John Howard, the small force of men drawn from the Oxfordshire and Buckinghamshire Light Infantry supported by sappers from the Royal Engineers sprang into action. Quickly overcoming the dazed defenders they seized the canal bridge, the nearby bridge over the river was soon also taken without a shot being fired.

Adding great authenticity and in tribute to all those who fought so valiantly throughout the invasion of Normandy, every print carries the original autographs of British veterans who served during the campaign. These include ‘Tich’ Rayner who, as part of the Ox & Bucks Light Infantry, fought to secure Pegasus Bridge in the early hours of D-Day.

Printed onto borders that were personally signed over many years, each copy carries the original and authentic autographs of eleven WWII Normandy Veterans:

Simon’s background as a commercial illustrator and his passion for military history are immediately evident through his subtle use of pencil and attention to detail. With a specially commissioned pencil drawing hand created in the lower margin of each print, these stunning eleven signature editions are highly collectible pieces.