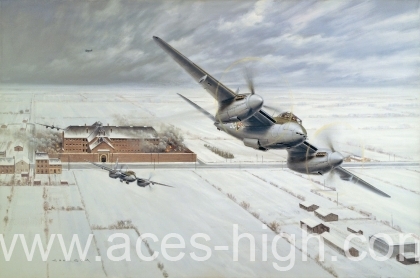 "I thank you in the name of our comrades for the bombardment of the prison. We were not able to save all. Thanks to the admirable precision of the attack the first bomb blew in nearly all doors and 150 prisoners escaped with the help of the civilian population. Of these, 12 were to have been shot on February 19. In addition, 37 prisoners were killed, some of them by German machine-guns, and 50 Germans were also killed."

January 1944, and the mood in London was sombre, as chilling as the cold January air that permeated the damp, dark cells of the Gestapo-held prison in Amiens. Amongst the unfortunates incarcerated behind the 3-ft thick, towering prison walls were several hundred members of the French Resistance, all condemned to death for their role in helping the Allies. Some had been betrayed, some had already been shot and the future of the others, including two Allied intelligence officers, looked bleak.

Information had now been received in London that further executions were set to be carried out at dawn on Saturday 19 February. The prisoners needed help, and fast, before the entire Resistance movement in northern France, their involvement crucial to Allied plans for the forthcoming invasion, was rolled up.

One of the most daring low-level bombing operations of World War II was now put in place; codenamed ‘Operation Jericho’, it would involve a force of 19 de Havilland Mosquitos from 464 Squadron RAAF and 487 Squadron RNZAF whose task was to first breach the 20-ft high outer wall, open up the wall of the main building and obliterate the guards’ quarters in the hope that the cell doors would be sprung open by concussion from the bomb blasts, allowing the prisoners to make a dash to freedom. The attack, under the command of Group Captain ‘Pick’ Pickard, would require precision flying of the highest order.

Operation Jericho would have been tricky enough in good weather, but on the morning of Friday 18 February snow was falling from murky skies as the Mosquitos took off from RAF Hunsdon and headed south towards Amiens, liaising with their Typhoon escort en-route.

Gerald Coulson’s outstanding painting of the raid Operation Jericho – The Jailbreakers, portrays the moment when Group Captain Pickard, the last over the prison, departs the scene just as the first time-delay bombs begin to explode. Within seconds the walls will be breached, the barracks destroyed and the cell doors flung open as planned, allowing the prisoners to clamber through the debris into the surrounding fields. More than 150 men will escape to re-join the Resistance.

At the time of original publication in 1994 the Artist Proofs, exclusively limited to just one hundred copies worldwide, remained un-released in preparation for the 75th anniversary in 2019. We are therefore proud to be part of these historic commemorations and offer collectors the opportunity to acquire an Artist Proof for the first time.

Each print is personally signed by a staggering collection of EIGHTEEN veterans directly involved in ‘Operation Jericho’ including two of the escapees, creating a truly remarkable collector’s piece and a fitting tribute to all those who took part in such a daring mission.