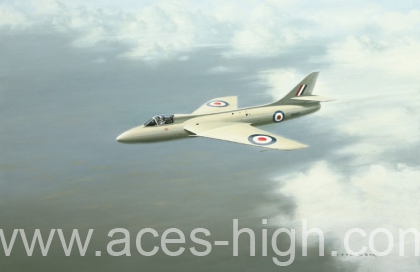 On 20th July 1951 WB188, the Hawker P.1067 Prototype, made its first flight from Boscombe Down, flown by Hawker Chief Test Pilot and WWII fighter ace, Squadron leader Neville Duke DSO, OBE, DFC**, AFC. This historic aircraft went on to become the Hunter, one of Britain's most successful fighter aircraft.

Created under the guiding hand of famed Hawker designer Sydney Camm, the PI067 Hunter became the RAF's standard single seat fighter from 1954 until 1960. It was also the first British produced swept-wing fighter to serve in large numbers in the RAF.

This superb release by one of the masters of aviation art, Gerald Coulson, depicts the prototype on its historic first ever flight from Boscombe Down. As usual Gerald has captured the speed and detail of the scene even down to Neville Duke's wearing of an American style 'Bone Dome' helmet, for possibly the first time in Britain.

Each print is signed by artist Gerald Coulson along with a legendary WWII Fighter Ace and former Hawker Chief Test Pilot who was the first to fly the Hunter: