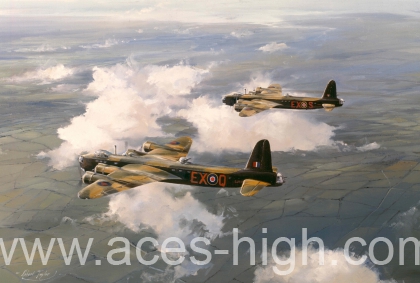 The Short Stirling entered service in 1941 and was the first four-engined heavy bomber to join RAF Bomber Command. To fly, it was easier than both the Lancaster and the Halifax, and the pilots loved it; to many of them it was referred to as ‘the gentleman’s aircraft. It flew with many squadrons, including the Pathfinders but it had a problem. The design of the Stirling, with its gawky high undercarriage and short stubby wings, suffered from performance problems and was replaced. But it wasn’t the end of the Stirling; in 1944 they found a new, and very important, role as troop-carriers and glider tugs during the D-Day landings and subsequent airborne assaults.

With a great history, and its distinctive looks, it’s surprising that more artists haven’t attempted the Stirling, which is one reason why this piece sold out long ago. The other is probably the desirability of the signature that comes with each print, that of Group Captain Hamish Mahaddie.

Always associated with the Stirling, and one of Bomber Command’s most ebullient figures, Hamish Mahaddie was, without doubt, the most important officer to work alongside Pathfinder chief Don Bennett. It was Mahaddie’s job to recruit the elite crews needed for the new crack unit, a task he relished and excelled at. Known as Bennett’s ‘horse thief’ he gathered the crème-de-la-crème into the Pathfinders, much to the annoyance of many regular Squadron commanders!

Because it was issued so long ago, prints can suffer from some degree of fading and the challenges caused by over-zealous handling in the passing of time. However, we always try our best to source only the best examples, usually from collections that have been stored carefully by loving owners.

Each print is signed by the artist and by: