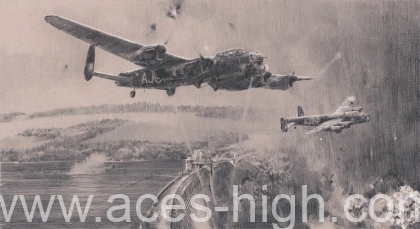 The aim was to destroy the great dams of western Germany. Many thought it mission impossible, but they underestimated the men of the newly-formed 617 Squadron – The Dambusters.

The story of RAF Bomber Command’s audacious attack on the great dams of western Germany continues to inspire long after the events that took place on the night of 16 / 17 May 1943 – and with good reason. Few wartime missions have replicated the skill, courage and bravery demonstrated that night and the Dambusters have rightly gained legendary status.

Codenamed Operation Chastise, the mission was to be carried out by 617 Squadron, a newly-formed unit established for the sole purpose of destroying primarily the Möhne, Eder, and Sorpe dams in the Ruhr valley. The resulting flooding to the factories, roads, railways and canals of the Ruhr, and subsequent disruption of hydro-electric power, would be immense.

Commanded by Wing Commander Guy Gibson, the unit’s task was unenviable, requiring supreme skills and undertaking enormous risks: they were to fly Lancasters, the largest bomber in the RAF’s arsenal, at night, at tree-top height across heavily-defended enemy territory to deliver a revolutionary new weapon – a ‘bouncing’ bomb, codename Upkeep. Designed by the aeronautical genius Barnes Wallis, the bomb would skip across the water before detonating against the dam wall. To launch that weapon the pilot must hold his aircraft precisely 60ft above the water whilst maintaining a constant, fixed airspeed of 210 mph, and the targets would be defended by flak or almost impossible terrain.

Robert Taylor’s dramatic work in graphite and paint – originally created as the working drawing for his highly acclaimed painting Three Good Bounces – depicts a moment during Flight Lieutenant Mick Martin’s attack on the Möhne Dam. With two attacks already made Martin, flying AJ-P, releases his Upkeep while Gibson in Lancaster AJ-G flies off his starboard beam in an attempt to draw some of the enemy flak. It was unsuccessful; his radio operator tapping out ‘Goner-5-8-A’ (the code for - ‘Special weapon released’) ‘exploded 50 yards from target’ – ‘no apparent breach’ – ‘target A’.

It would require two more attacks, from ‘Dinghy’ Young in AJ-A and David Maltby in AJ-J, before the weakened dam was finally breached, sending a tidal wave of water into the valley below. For Gibson it wasn’t over; he will lead the remaining crews to successfully breach the next target, the Eder dam.

Robert Taylor’s skill and artistry reflects his intimate and authentic knowledge of the events that took place on that epic, moonlit night in May 1943. Over the past four decades he has enjoyed the company of almost every man to survive Operation Chastise, has listened to their stories first-hand, and counted many of them as friends. The knowledge acquired, and the friendships gained have, without doubt, given Robert an unparalleled insight into the legendary Dambusters.

Printed and signed some years ago in preparation for the 75th anniversary, we are honoured that four veterans who took part in this iconic mission have personally signed the prints in this poignant release. By endorsing the edition, their signatures help create a historically important collector’s piece to be cherished for future generations.

Joining artist Robert Taylor every print has been personally signed by three veterans who took part in the Operation Chastise:

Each print in these eight signature editions is additionally signed by an iconic Dambuster and conservation matted to include the original autographs of an additional four veterans of this historic mission:

For those collectors who want something extra, these two very exclusive editions will include an original pencil drawing by Robert Taylor hand-crafted to order in the lower margin of the print.

Limited to just fifteen copies worldwide plus ten DOUBLE remarques – with a larger and even more elaborate drawing – collectors have the opportunity to acquire a highly sought after original work by the world’s most collected aviation artist. Each remarqued copy is then individually conservation matted with all components of the Collector’s Edition.