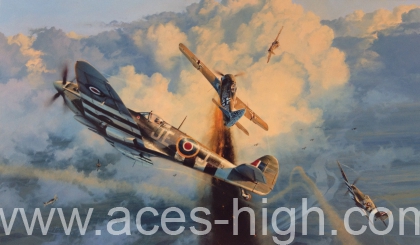 Operating from an ex-Luftwaffe base at Culot in Belgium, the Johnnie Johnson Canadian Wing were in combat most days the weather permitted. The Luftwaffe had staged a remarkable recovery after its Normandy defeat and by September 1944 was at operating strength from airfields east of the Rhine. Big formations of Fw190 and Me109 fighters were pitting themselves against the RAF’s ground attack Typhoons and it was the Canadians task to get to the Luftwaffe fighters first.

“Kenway to Greycap. Bandits flying down the Rhine towards you. Steer One Three Zero”. “Greycap to Kenway. Roger. How many?” “A small gaggle – about a dozen. Out”. Leading 443 Squadron, Johnnie Johnson swings his twelve Spitfires to the Southeast, following the course of the river at 12,000 feet. All eyes are peeled. “Greycap from Red Three. Nine bandits below”. With all the essentials of tactical success – speed, height and surprise, the Canadians plummet into the enemy fighters. Within seconds the air becomes a tangle of twisting, turning fighters.

Robert Taylor takes up the story moments after the attack and portrays the dog fight scene as only he can. Greycap Leader – Johnnie Johnson – has already bagged an Fw190 and is hauling his Mk IX Spitfire around looking for a second whilst to starboard his wingman draws a bead on another Fw190. In the distance more enemy fighters appear, they too will shortly receive the attention of the Canadians.

Each print in this edition has been hand-signed by the artist in addition to: