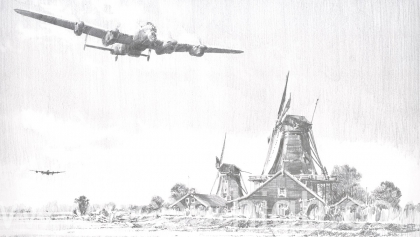 On the night of 16 / 17 May 1943, nineteen specially modified Lancasters of 617 Sqn left RAF Scampton to attack the mighty dams of the Ruhr valley using an ingenious 'bouncing bomb'. What followed would become legendary as one of the most audacious bombing raids ever attempted, and within hours the destruction of the Möhne and Eder dams would wreak havoc with the German war machine.

This cameo drawing from Robert’s Graphite Collection portrays the Lancaster of Wing Commander Guy Gibson leading the first wave with precision low flying over Holland en-route to the Möhne dam.

Each print is accompanied by a matching numbered copy of the fascinating book, We Will Remember Them, written with Guy Gibson's widow, Eve Gibson and the portfolio includes the original signatures of Dambuster veterans.

The Matching Numbered Book - WE WILL REMEMBER THEM

This unique insight into the life of Guy Gibson – the leader of the Dambusters Raid – is written by the man who devoted himself to tend Gibson’s grave and final resting place in Holland.

Compiled with Gibson’s widow, Eve Gibson, this fascinating book is packed with photographs, diagrams and illustrations telling the story of Operation Chastise as never before.

Each print is individually numbered and personally signed by the artist along with two RAF veterans who served with 617 Squadron on the Dambusters raid:

This FIVE signature edition is conservation matted to include RAF Wings and the original pencil signatures of two further Dambuster veterans.

Each accompanying book also includes a specially released signed bookplate which has been autographed by the daughter of Sir Barnes Wallis who, as a child, helped inspire her father to develop the ingenious Bouncing Bomb used in the raid.

There are few better ways to acquire Robert's original work than his exquisite pencil remarques. Each remarque drawing will be individually created on a separate sheet of paper and set into the conservation matting.

These highly collectible editions are only available in extremely limited quantities so contact us early with your requirements.