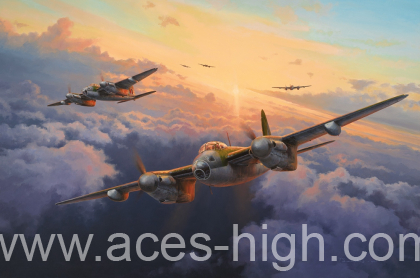 Born out of the company that had designed the DH.88 Comet high-speed racer, de Havilland’s Mosquito was one of the fastest, most versatile piston-engine aircraft of the war, designed from the outset as an aircraft that relied on speed rather than guns for defence. Powered by twin Merlin engines it was fast, highly manoeuvrable, and possessed the range to roam over enemy-occupied territory almost at will. Even more remarkable, with metal alloys in short supply, most of its fuselage and wings were constructed of balsa and lightweight ply, a unique feature that led to its affectionate nickname ‘The Wooden Wonder’. It would arguably become the most adaptable Allied aircraft of the war; outstanding as a fighter-bomber, night fighter, in coastal and shipping strikes, meteorological patrols and photo-reconnaissance operations.

The first unit to receive the Mosquito was 105 Squadron; taking delivery of their new machines in November 1941 and often operating alongside 139 (Jamaica) Squadron, they soon became experts on delivering blistering low-level precision strikes such as the audacious attack on the Gestapo headquarters building in Oslo on 25 September 1942. They are also the unit chosen by leading aviation artist Anthony Saunders to represent all those who flew the Mosquito in his dramatic painting Mosquito Thunder. Set on 1 April 1943 – the twenty-fifth anniversary of the RAF’s formation – Anthony depicts Sqn Ldr Roy Ralston DSO DFM leading a group of the squadron’s aircraft as they race home to RAF Marham following a highly successful strike on the railway workshops in the German city of Trier.

Faithfully reproduced as a Limited Edition print, each copy has been personally signed by artist Anthony Saunders and serves as a fitting tribute to all those who flew this magnificent aircraft during the Second World War.