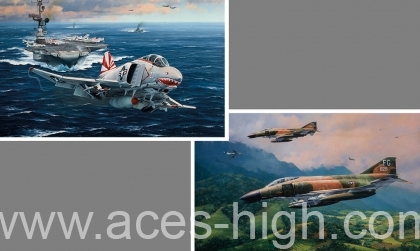 Two powerful Limited Edition prints by Anthony Saunders – each is available individually or as a matching-numbered pair whilst stocks allow!

Both pieces feature the iconic McDonnell Douglas F-4 Phantom II which was used extensively by both the USAF and USN in Vietnam:

F-4 Phantoms of VF-111, ‘The Sundowners’, launch from USS Coral Sea in the Gulf of Tonkin in a successful attempt to intercept North Vietnamese MiGs returning to Quang Lang airfield, 6 March 1972.

As America sought to extricate itself from the war in Vietnam, by the beginning of 1972 US troop levels in the country had fallen dramatically from their all-time high in 1968. The United States was now relying primarily on air power to help the South Vietnamese Army, including US Navy units based on carriers operating in the Gulf of Tonkin. One of these was VF-111 – The Sundowners, portrayed in Anthony’s brilliant painting.

Already internationally renowned for his stunning depictions of WWII scenes, Anthony has excelled all expectations with this piece, unbelievably his first-ever jet painting. The lead Phantom depicted is NL201, call sign ‘Old Nick Two Zero One’, flown on this mission by experienced pilot Lt Garry L. Weigand and his back-seater, Radar Intercept Officer Ltjg. William C. Freckleton. They were part of a two-ship team tasked to intercept MiGs that had just clashed with Phantoms of VF-51 on a strike force escorting a photo-reconnaissance RA-5C Vigilante over Quang Lang airfield. They found a MiG-17, and in a ‘nasty turning fight with the scrappy little plane’, Weigand manage to roll in on the MiG from the rear and in a dramatic victory, downed it with a Sidewinder.

Colonel Robin Olds and his flight of eight F-4 Phantoms from the 8th Tactical Fighter Wing encounter a large group of North Vietnamese MiG-17s over the hills north of Hai Phong, 20 May 1967. During the clash that followed Olds and his WSO 1st Lt. Stephen B. Croker destroyed two MiG-17s.

In September 1966 when the 44-year-old former WWII fighter ace Colonel Robin Olds arrived to take command of USAF’s 8th Tactical Fighter Wing at Ubon, a Royal Thai Air Force base close to the border with Laos, the war in south-east Asia was escalating rapidly. He found many of the pilots in his new command were accomplished and experienced fliers, but morale was flagging – what they needed was some inspirational leadership. It only took Olds a few weeks to prove he was the best leader they’d ever had.

It wasn’t long before Olds’ 8th TFW were involved in some of the biggest and most successful air battles of the war. One such incident occurred shortly after the moment depicted in Anthony’s outstanding piece when Olds and his WSO, 1st Lt. Stephen B. Croker, would destroy two MiG-17s. These were aerial victories three and four for Olds, making him the leading MiG killer in south-east Asia at that time.