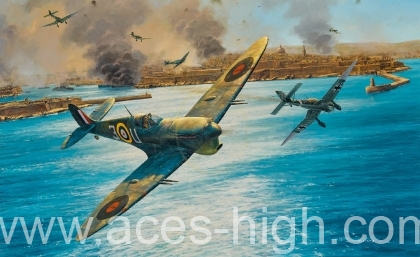 For two years following the Italian Declaration of War against Britain in the summer of 1940, the tiny island of Malta became one of the most heavily bombed places on earth as the Axis air forces fought to force it into surrender. They hadn’t reckoned on the island’s resolve.

But he was wrong, and just as the Luftwaffe had underestimated British resolve in the Battle of Britain, so too did they misjudge the resolve of the Maltese people and her defenders.

On 20 April 1942 the American carrier USS Wasp flew in 46 Spitfires, but such was the intensity of air fighting that almost all were destroyed within a few days. But it was a start: on Saturday 9 May another 60 Spitfires flew to the island’s airfields, again from the Wasp and the British carrier HMS Eagle. The next day, just as Kesselring was bragging to the Führer of the island’s parlous state, most of those Spitfires were in action against a large force of Luftwaffe raiders, lavishly equipped with Ju87s, Ju88s and Bf109s. The German pilots were stunned by the ferocity of the opposition as, heavily outnumbered, the RAF fighter pilots, including volunteers from America, put up a tenacious defence.

The air battles that took place over Malta that day were the largest ever witnessed over the diminutive island and the unexpected Allied victory marked a turning point in the Mediterranean theatre. At the end of the day 57 enemy aircraft had been destroyed or damaged by RAF fighters and another eight had been shot down by flak. Never again would the Luftwaffe return with such force.

Already noted as one of the most gifted aviation artists of his generation, Anthony Saunders depicts a glimpse of events that day in this eye-catching piece. In the foreground Sergeant Paul Brennan of 249 Squadron destroys a Ju87 in some of the fighting over Grand Harbour, Valetta whilst in the background the island’s anti-aircraft guns, boosted by a recent and much needed supply of ammunition, put up a huge barrage of flak.

Widely considered as some of the best in the industry, Anthony’s unique pencil remarques, limited to only 25 copies, are individually created in the lower margin of the print and are a perfect way for enthusiasts to collect original art.

Created specially for the serious collector, the DOUBLE REMARQUES are much bigger than a standard remarque and exclusively restricted to just 10 copies worldwide.

Using the most sophisticated digital Giclée technology, each Studio Proof is printed directly on to fine canvas creating a stunning piece which has all the look and feel of an original painting.