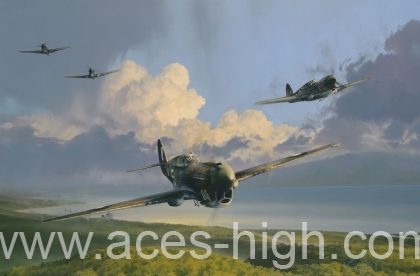 The Battle for Milne Bay in New Guinea was a story of true grit, determination, and valour; it was the moment when the Imperial Japanese Army tasted defeat on land for the first time in nearly three centuries.

75 Sqn RAAF was formed in the darkest days of WWII, in March 1942, when Australia had not one fighter squadron in the entire continent, and the Japanese already had attacked Darwin, Broome, the Torres Straight and Port Moresby, and had captured Rabaul. Kittyhawk fighters from US supplies were handed over and two weeks after receiving them, 75 Sqn was in action in New Guinea. For 44 Days, 75 Sqn flew alone as the sole fighter defence for Port Moresby. Reduced to a single Kittyhawk, 75 withdrew to Australia, re-equipped, and moved to Milne Bay, where, with 76 Sqn, it provided the decisive factor in that historic defeat of the Japanese.

In this atmospheric painting Robert Taylor, the world’s most collected Aviation Artist, features Kittyhawks of 75 & 76 Squadrons RAAF returning to No. 1 Strip after strafing enemy positions during the Battle for Milne Bay, August/September, 1942.

The feature aircraft, Polly, A29-133, is a survivor of the battle and now resides in the Australian War Memorial, Canberra.

The edition is individually signed by two P-40 veterans who flew and fought at Milne Bay, each representing 75 & 76 Squadrons RAAF. Each copy is also signed by the artist and hand-numbered.

The THREE signature Artist Proofs are additionally signed by:

This EIGHT signature Edition is also signed by:

With all the signatures of the ‘Collectors Edition’, the Publisher Proofs are issued with exclusive matching numbered copies of Robert Taylor’s pencil drawing PATROLLING THE TOP END. There are a total of NINE signatures in this historic edition: