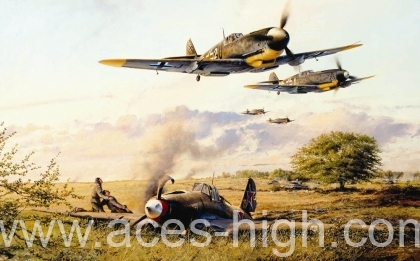 Robert Taylor had the unique opportunity to actually listen to the great aviators who fought in the bitter air battles of World War II, and one such story formed the basis of Hartmann Tribute depicting Erich Hartmann - history’s highest scoring Ace whose record in aerial combat is never likely to be equalled.

Top-scoring Luftwaffe ace Erich Hartmann is depicted in his Me109G-4 in the spring of 1943 during the Kuban battle in Southern Russia - the Army Group commanded by Field Marshal Kleist - after Russian Sturmoviks have made a determined attack on a Panzer division.

Luftwaffe Me109s from JG-52 have beaten off the attack, and the German tanks are on the move again. In the foreground, the crew of a Russian Sturmovik evacuate their stricken aircraft, while overhead a jubilant Erich Hartmann and friends make a low pass to celebrate their victory.

Each copy of Hartmann Tribute has been signed by the artist along with the legendary Luftwaffe Ace: