HEIGHT OF THE BATTLE 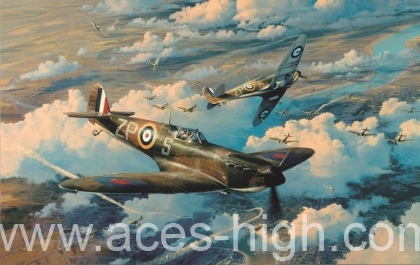 By mid-afternoon on Wednesday 11th September, 1940 German bomber formations were plotted flying up the Thames Estuary towards London. To deal with the imminent raid Fighter Command scrambled nine squadrons to make the intercept. As the Luftwaffe bombers approached the docklands east of London, sixty Spitfires and Hurricanes fell upon them and a pitched battle ensued. Leading No. 74 'Tiger' Squadron, 'Sailor' Malan, ignored the fighter cover and tackled the bombers, the Spitfires ripping into the Heinkel IIIs in an effective beam attack. Having made one diving attack and zoomed back above the raiding Heinkel IIIs, the fighters peel off for a second attack, Malan already winging over with Stephen on his heels. Below Hurricane Mark Is of 17 and 56 Squadrons have joined the turbulent fray.

Released in 1996 this edition pays tribute to the Spitfires and Hurricanes that served their pilots so well during the Battle of Britain. There were three editions released, each dedicated to the RAF, Canadian and Australian Air Forces with each main print being accompanied by a different companion print depending on the edition.

Each print is signed by the artist and issued with a companion print, between them carrying the signatures of no less than SEVEN Battle of Britain fighter pilots.

Commemorating the Hawker Hurricane and the role it played during the Battle of Britain, the companion print HURRICANE ATTACK which depicts John Grandy leading Hurricanes of 249 Squadron over the Isle of Wight , August 1940.

Commemorating the 75th anniversary of the Royal Australian Air Force, formed in 1921, each companion print TARGETS OF OPPORTUNITY depicts Clive Caldwell and Bruce Watson flying Spitfires of No. 80 Fighter Wing R.A.A.F. attacking targets of opportunity in the South West Pacific, 1945.