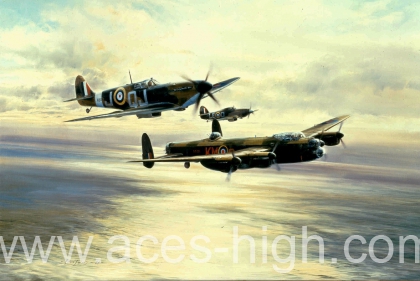 Formed in 1957, the RAF’s Battle of Britain Memorial Flight remains one of the world’s great ‘flying museums’, a proud tribute to Britain’s military aviation heritage. As well as the five Spitfires and two Hurricanes, the Flight contains one of only two airworthy Lancasters in the world. Although numerous photographs have been taken of the Memorial Flight, few artists have succeeded in capturing the ‘essence’ of the three most important World War II aircraft as Robert Taylor has achieved with this wonderfully evocative portrayal of the Memorial Flight flying in formation over the English Channel, the late afternoon sun glinting on the sea below.

Although published in the mid-eighties and susceptible to fading, there are still pristine examples to be found. We do our upmost to source only mint, or near mint copies.

What makes this piece especially collectible are the three legendary names whose signatures embellish the prints: Norman Jackson, the famous Lancaster VC winner who climbed out on to the burning wing of his Lancaster in an attempt to stem a fire; the Allies’ top-scoring Ace and Spitfire legend, Johnnie Johnston; and Peter Townsend, Hurricane Ace and one of the most gifted and highly respected fighter leaders of World War II.