MASTERS OF THE SKY 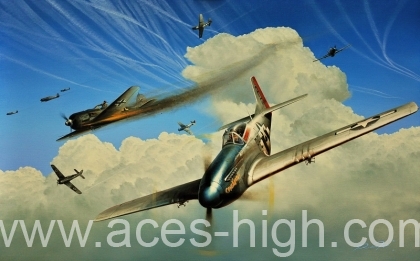 Led by their Commanding Officer Major George Preddy, highest scoring ace in the 8th Air Force, P-51 pilots of the 328th FS, 352nd Fighter Group engage in a bitter struggle with Fw190s in the cold winter air high over Merseburg, eastern Germany. Above, B-17s of the Mighty Eighth turn for home after delivering yet another heavy blow to the enemy’s infrastructure, Tuesday 21 November 1944.

The three squadrons of P-51 Mustangs that made up the 352nd Fighter Group contained a remarkable collection of fearless young aviators who, amongst other things, provided more ‘Aces in a Day’ than any other P-51 Group in any theatre. These were pilots such as George Preddy - the highest scoring P-51 Mustang Ace in the Eighth Air Force - who downed 6 Me109s in a single day, and Don Bryan with 5 victories in a day. No less than twenty nine of the USAAF’s top aerial Aces in Europe were also from the 352nd, and twelve 352nd pilots scored aerial victories over the revolutionary German jet fighters.

To commemorate the men who flew with the 352nd Fighter Group during World War II, Richard Taylor has created his magnificent painting, Masters of the Sky.

This outstanding new limited edition, together with the masterful companion drawing PREPARING FOR ACTION, further enhances Richard Taylor’s growing reputation as one of the world’s greatest aviation art talents.

The edition is signed by some of the 352nd’s most respected pilots and by a number of their vital ground crew, this is an edition for all collectors of aviation art to treasure and admire.  Joining artist Richard Taylor, this two signature limited edition has been individually signed by:

With all the components of the Limited Edition, the FOUR signature Collectors’ Edition is additionally signed by the following highly distinguished 352nd fighter pilots:

In addition to the components of the Collectors’ Edition, the ELEVEN signature Blue Nose Edition is signed by a further three well known 352nd FG pilots.

Also signing the companion print on the Blue Nose Edition are four further ground crew veterans who served with the 352nd Fighter Group in Europe. These men were pivotal to the success of their fighter pilots.

The Artist Proof and Remarque Editions

In addition to the components of the Blue Nose Edition, these TWELVE signature editions are additionally signed on the main print by: