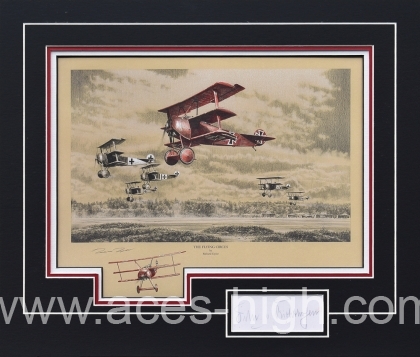 The most successful air Ace of World War I, Manfred Albrecht Freiherr von Richthofen, was better known to friend and foe alike as ‘The Red Baron’. With 80 confirmed victories, all scored in a short spell between September 1916 and April 1918, his rise to fame had been meteoric: with little over two years’ experience as an airman, first as an observer before becoming a pilot, he’d quickly racked up a string of victories to become not only a dashing national hero but the recipient of the coveted Pour le Mérite – the ‘Blue Max’ – Germany’s highest military award at that time. He’d just turned 25 when, in June 1917, he took command of a new elite fighter wing, Jagdgeschwader 1.

Soon to be known as ‘Richthofen’s Flying Circus’ due either to the distinctive colours of their aircraft or because they travelled up and down the front using makeshift airfields like a ‘travelling circus’, the four squadrons that comprised Jagdgeschwader 1 quickly established themselves as one of those most admired, and feared, by the men of the RFC with whom they duelled on a daily basis in the war-torn skies over the Western Front.

In his stunning graphite work Richard Taylor brilliantly recreates a scene at an airfield in Flanders shortly before the German Spring Offensive of 1918. Flying his distinctive, highly-recognisable red-painted Fokker Dr.1 tri-plane, Richthofen leads his men away from their makeshift base towards the British lines. As they prowl the skies above the Front an encounter with the RFC will surely happen and the pilots of the ‘Flying Circus’ will once again be wheeling and turning in yet another death-defying cauldron of one-on-one, close-combat dog- fights.

A few weeks after the scene portrayed in Richard’s drawing the Red Baron took to the air for the last time. On 21 April 1918, flying his iconic tri-plane and with 80 confirmed aerial victories to his credit, Richthofen was killed by a single bullet during a low-level dogfight over the Somme.

Regarded as one of the most gifted exponents of pencil work in the industry, Richard’s graphite editions prove extremely popular the world over. To make every print in this highly-restricted edition completely unique, each has been returned to his studio for the inclusion of a specially-commissioned pencil Remarque in the lower border.

Completing these very special portfolios and adding great historical importance, prints are then mounted to full conservation standards to include the original and fully-authenticated signature of the famous Ace depicted which have been sourced and collected over a number of years: