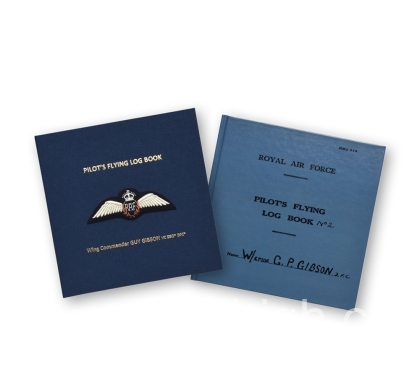 Presented in its own luxury embossed presentation box with an ORIGINAL PENCIL DRAWING by Richard Taylor and specially printed Certificate of Authenticity.

Established in 1975 the Military Gallery is the world’s leading publisher of aviation and military art. Representing many of the finest artists in the industry and pioneering the genre, it’s with unrivalled pedigree that the Military Gallery breathes new life into such a classic item as this stunning reproduction of Wing Commander Guy Gibson’s ‘Pilot’s Flying Log Book No.2’.

Officially licensed as a faithful reproduction of the original, which is held in the Public Records Office in London, only a limited number have ever been produced. It covers the period from 15 November 1940, with the first written entry an ‘aileron / elevator test’ on a 29 Squadron Blenheim, and records all of his subsequent flights up to the ‘air test’ of a P-38 Lightning on 16 September 1944. Three days later, on 19 September, Gibson was killed piloting a Mosquito over Holland. For Dambuster enthusiasts, however, the most important entries are those leading up to and including the mission that took place on the 16 / 17 May 1943 – the night he led the Lancasters of 617 Squadron on Operation Chastise, the legendary raid for which his leadership and conspicuous bravery led to the award of the Victoria Cross.

To make this special book even more unique, we’re delighted to release two highly-restricted editions, both of which feature Gibson’s Flying Log Book at their heart:

Strictly limited to just NINETEEN copies in memory of the nineteen Lancaster crews that took part in Operation Chastise. Each copy features a faithful reproduction of Guy Gibson’s Flying Log Book No.2 enclosed within a velvet-lined, embossed presentation box which also contains an ORIGINAL pencil drawing specially crafted for the occasion by Richard Taylor, one of Britain’s most talented aviation artists. Both drawing and replica Log Book are authenticated by a specially-formulated Certificate of Authenticity.

Of the nineteen aircraft that set out from Scampton on Operation Chastise, only eleven returned and remembering those survivors, this edition is restricted to only ELEVEN copies worldwide. Each original drawing is conservation matted within the presentation box to include the authentic signatures of FOUR famous Dambusters, including the last surviving veteran to take part in the raid:

But that’s not all – to complete the Veterans Edition, each copy is issued with a special Certificate of Authenticity which doubles as a unique information booklet and includes biographies of the four signatures, full crew list of those who took part in the raid, plus an overview of the awards received by members of 617 Squadron for their part in the raid.

*Each original drawing is completely unique and different to the next!*