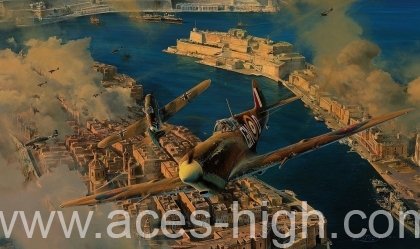 Pilot Officer John Bisley of 126 Squadron in combat with Me 109s from JG-53 during one of the intense aerial air battles over Valetta in April 1942. Between the summer of 1940 and the end of 1942, Malta became one of the most bombed places on earth. The RAF’s desperate fight to retain control of the diminutive Mediterranean island, and the defiant courage of the people of Malta, is one of the epic stories of World War Two.

Signed by Six Pilots who flew Spitfires in defence of Malta.

Each print in the Malta Edition carries the six signatures above and is also issued with a companion print, HMS Illustrious, which has been signed by an additional three pilots:

Along with all the components of the Malta Edition, each exclusive copy of the George Cross Edition boasts an additional four signatures on the main print and TWO additional companion prints - Faith Over Midna and Night Eyes of Malta - along with a signed fascimile copy of Flight Lieutenant Parkinson's wartime diary of Malta.  Faith Over Midna offers two further signatures and Night Eyes of Malta features four signatures - bringing the total to an astonishing NINETEEN.  Those signatures together are: