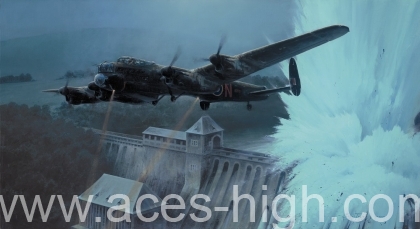 Lancaster AJ-N scores a direct hit on the Eder Dam with its bouncing bomb during the famous Dambusters raid on the night of 16/17 May 1943. Pilot Officer Les Knight and Flight Engineer Ray Grayston fight the controls to clear the dam, combining their physical strength to haul the lumbering Lancaster up and over the dam and clear the high ground that lies ahead. With a tremendous explosion the Eder Dam collapsed before their eyes. Below and behind them, the second of Germany’s mighty western dams lies finally breached.

Each individual print in this edition is personally signed by two veterans of the epic Dambusters Raid, as well as the artist Robert Taylor.

The SIX signature Collectors Edition has been published specially for aviation art collectors and Dambuster enthusiasts with each print bearing the additional signatures of the following veterans:

Issued with an ORIGINAL Robert Taylor pencil drawing. Limited to just nineteen proofs representing the number of aircraft flown on the Dams Raid, each is accompanied by an ORIGINAL Dambusters pencil drawing by Robert Taylor, matted to conservation standards to include the original signatures of three of the most famous names associated with the Dambuster Raid.

To replicate the artist’s original painting so faithfully, each proof is individually crafted by a specialist master printer laying down solid colour on canvas, so that only the experienced eye can distinguish them from the original. With each of these 25 proofs individually signed by the artist Robert Taylor in oil paint, all SIX of the veterans whose signatures appear on the Collectors Edition paper print have individually signed the unique Presentation Certificate issued with each copy in this Giclée edition.