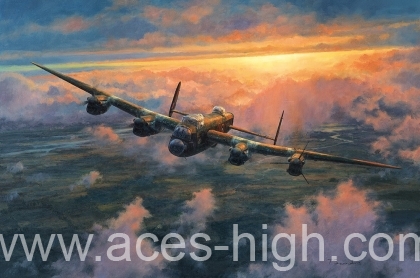 An atmospheric edition commemorating the aircrews of RAF Bomber Command

The Avro Lancaster can justifiably claim to have been the RAF’s most successful bomber of World War II. Following its first operational sortie in 1942, for the last three years of the war the Lancaster, supported by the Halifax, formed the backbone of Bomber Command’s relentless offensive against strategic industrial targets of Nazi Germany. Night after night the brave airmen took off knowing that highly-trained Luftwaffe crews and ferocious ground-based defences awaited them over objectives that included shipyards, the aircraft industry, transport, synthetic oil plants along with anything else deemed responsible for keeping its war machine functioning. The ultimate success of that long campaign rested largely on the shoulders of the Lancaster, and the bravery of the aircrew who flew and fought in her. Ten Victoria Crosses were awarded to Lancaster crew and, by the end of hostilities these incredible bombers had flown over 156,000 missions and dropped more than 608,000 tons of bombs.

Victory, however, came at a sombre price with aircrew in Bomber Command suffering some of the worst casualty rates of the war. On average a typical Lancaster bomber survived a mere 21 missions, and nearly half of the 7,377 Lancasters built were shot down along with the loss of over 21,000 airmen, their average age was just 22. With such odds stacked against them it’s miraculous that any Bomber Command aircraft completed more than a hundred operational sorties yet nearly thirty were ‘lucky’ enough to do so, or come very close, and most of them were Lancasters. They included Lancaster B.III (JB138), QR-J Just Jane that served with 61 Squadron, the aircraft selected by artist Anthony to feature in Lucky Jane, his stunning tribute to the RAF’s finest bomber of the war.

Beautifully painted in his unmistakable and much admired style, Anthony has depicted the bomber, flown on this occasion by Wing Commander ‘Reggie’ Stidolph, Commanding Officer of 61 Squadron, as she returns after a raid on Stettin on the night of 5 / 6 January 1944. Badly damaged by an attacking Me210 night-fighter, which in turn was shot down by return fire from the bomber’s hawk- eyed gunners, Wing Commander Stidolph has skilfully managed to nurse QR-J Just Jane back across the North Sea. With holes in her fuselage, wings and fin and with her outer port engine feathered we see the damaged bomber, having crossed the English coast, descend through cloud towards an emergency landing at RAF Matlaske in Norfolk. The Lancaster had been in the air for nearly ten hours and had just 8½ gallons of fuel left in her tanks.

Flying until the end of the war, QR-J Just Jane survived 123 operational sorties, and was one of four Lancasters from 61 Squadron to join the select ‘One Hundred’ club.

Each print in the edition has been personally signed by artist Anthony Saunders and serves as a fitting tribute to the brave airmen who flew Lancasters with Bomber Command during WWII.

Adding considerable historic significance, each copy in these restricted editions has been signed for posterity by a highly-regarded Lancaster veteran who flew on operations during WWII and mounted to full conservation standards to include the original and authentic autographs of two famous WWII Lancaster veterans, including a pilot who received the Victoria Cross whilst flying with 61 Squadron: