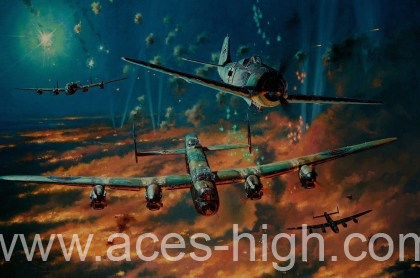 On the night of 23/24 August 1943, a lone Fw190 of the Luftwaffe’s crack unit JG300 Wilde Sau, defiantly engages a force of RAF Lancasters in the heavily defended, flak-torn skies over Berlin. With the heavy bombers illuminated by bursting flak and the fires of the burning city below, the Luftwaffe pilot engages his target, just one of over 700 RAF long-range bombers thrown into the assault that night.

It was the opening salvo to the Battle of Berlin, the long and bitter aerial offensive against Hitler’s seat of power that would rage throughout the winter to follow. From November 1943 till March 1944 RAF Bomber Command would make 16 massed attacks on Berlin. When the battle was over, the capital of the Third Reich lay shattered and in ruin, but the crews of RAF Bomb Command had paid a heavy price - 492 aircraft failed to return.

Depicting the full drama of this massive raid, Anthony Saunders’ powerful painting, BERLIN BOAR FIGHT - released as part of the Night Skies over the Reich Portfolio with NIGHT HUNTERS - is a masterful interpretation of events that night, created with extra authenticity of first hand reports from some of those who took part.

Each print in all of the editions has been individually signed by the artist and a further two RAF Bomber Command veterans who flew Lancasters on night time bombing raids over Germany along with one of the Luftwaffe’s most respected night fighter Aces: