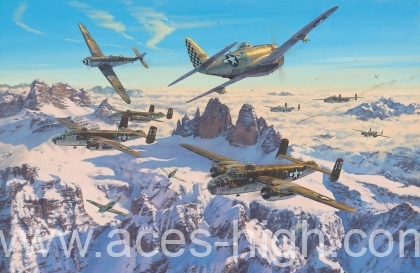 Whilst the Allies pushed ever closer towards Berlin, in the south, amidst the snow-capped mountains of the Italian Alps, an equally bitter and increasingly brutal battle was raging as the Axis forces struggled to keep open their last major supply route – the Brenner Pass.

On the ground hundreds of heavy flak batteries now formed a formidable opposition to the American bombers targeting the transport links along the pass. In the air, however, the Luftwaffe had retreated. Fighter operations now rested with the remnants of the ANR, or Aeronáutica Nationale Republicana, that part of the Italian air force that had remained loyal to Mussolini and the Germans.

Although supplied with the latest Bf109s from their German partners, this ramshackle group of Italian pilots were in short supply of everything – except courage. Even as the last months of the war drew near they battled on, heavily outnumbered but an ever-present threat to the men of the US 12th Air Force.

Anthony Saunders’ dramatic painting captures one encounter that occurred on 14 March 1945 when B-25 Mitchells from the 321st Bomb Group ran into a group of ANR Bf109s from 1 Gruppo Caccia whose top Ace, Major Adriano Visconti, led the charge. His attack, however, was short-lived as he took hits from the P-47D of 2nd Lt Charles Eddy flying escort with the 350th Fighter Group. Visconti was forced to bale out over the snow-clad mountains below.

Adding even greater authenticity to this dramatic work, the artist is joined in signing each print by two highly-decorated pilots who braved the ANR onslaught and fought many epic battles over the Italian Alps and the Brenner Pass, creating a historic collectors piece.

Joining artist Anthony Saunders in signing every print are two highly decorated pilots who flew and fought in the Italian Theatre during WWII: