LOW PASS OVER THE MÖHNE DAM 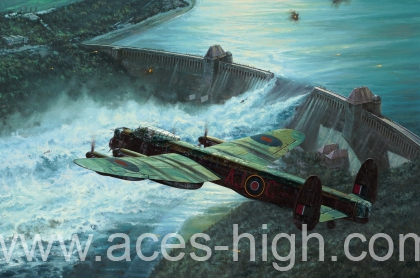 In late February 1943 a unique decision was taken by the RAF to form the now legendary 617 Squadron, a highly specialised unit within Bomber Command. Its task was to be the destruction of the huge Möhne, Sorpe and Eder dams, which provided vital services to German industry. Tasked with providing the crews for this new squadron was the young, outstanding, bomber and night-fighter pilot Wing Commander Guy Gibson, already a veteran of 174 bomber operations. On 21 March 1943 the unit was formed at RAF Scampton under his command, and the chosen men had just eight weeks to prepare for the task in hand.

The specially modified Lancasters would drop a unique mine developed by the aeronautical design genius Barnes Wallis. This special ‘bouncing bomb’ would, when dropped from a precise low level, bounce across the water like a skimming stone before sliding down the dam wall and detonating. Of the nineteen Lancasters that took off from Scampton on the night of 16/17 May 1943, eight would never return, but the damage and industrial dislocation caused was considerable, and the boost to the morale of the British people immense

Anthony Saunders’ powerful painting, LOW PASS OVER THE MÖHNE DAM, portrays Guy Gibson under fire from the defending garrison as he powers his Lancaster AJ-G at full throttle over the dam to confirm the extent of the successful breach. Below him, and clearly visible, the bright moonlight reveals the huge rupture in the dam’s massive wall as the swirling avalanche of water surges into the valley below. With the subsequent destruction of the Eder Dam, and the damage to the Sorpe Dam, the men of 617 Squadron had achieved what they were asked, and more.

The edition is signed by the artist and hand numbered and each print is individually signed and authenticated by three veterans who played a vital part in this legendary raid: