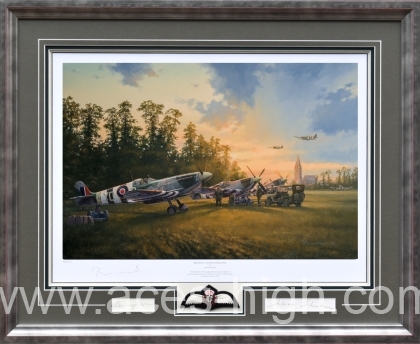 Mk.IX Spitfires of 401 Squadron RCAF prepare to head out on an evening patrol from their forward airstrip, B-4, at Beny-sur-Mer in Normandy, late June 1944.

Months of planning had gone into preparing for D-Day and success, or failure, hinged on a myriad of operations. And, as with Hitler’s proposed German invasion of Britain in 1940, victory could only be achieved through total air superiority.

By 6 June 1944 the Allies had full control of the skies over the Channel but they were taking no chances; following the combat troops ashore on D-Day were specialist engineers tasked with the construction of temporary advanced landing airstrips which would allow Allied fighters to operate from France.

One of them, B-4, was at Bény-sur-Mer, a village a few miles inland from Juno Beach that had been liberated by the Canadians on D-Day. The airstrip was opened on 15 June and, fittingly, one of the first squadrons to take up residence was 401 Squadron RCAF, the unit chosen by Anthony Saunders to take centre stage in his evocative piece.

To make it even more special, our expert framing team have matted this copy to include the original autographs of two highly-regarded Spitfire pilots who flew with the Canadian Wing during the Normandy Campaign: