LANCASTER UNDER ATTACK - The Masterwork Drawing 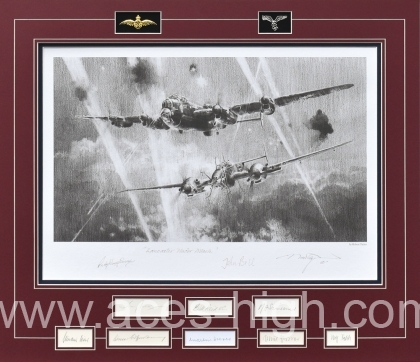 It was probably the worst nightmare a Lancaster crew could face – stalked in the dark night skies over Germany, hunted, surprised and then attacked by a Luftwaffe night fighter. Often it was too late…

Resurrected from within Robert Taylor’s personal archives is the original Masterwork Drawing of Lancaster Under Attack, one of the most dramatic studies the artist has ever produced. It was the original concept behind his now famous and sought- after colour print of the same name which was published as a limited edition from an original painting over twenty years ago.

Robert sets the scene in the night skies over Osterfeld in December 1944 in which a Lancaster from 626 Squadron is forced to take evasive action as a Bf110 G-4 night-fighter makes a close pass beneath it. Both pilots are locked in a dangerous duel as they battle to out-manoeuvre each other. The Lancaster, hampered by damage, jinks through the darkness whilst the Luftwaffe pilot is forced to quickly dive away to avoid the stream of tracer emanating from the bomber’s front turret. The contest could go either way.

To achieve accuracy, Robert consulted veterans from both sides of the drama. Flight Lieutenant Bill Reid who served as a pilot on Lancasters with 61 and 617 Squadrons and was the recipient of the Victoria Cross, provided a chilling insight into what it was like being on the receiving end of such an encounter. At the same time, Major Martin Drewes, one of the most formidable Luftwaffe night-fighter pilots of the war, described such an action from the attacker’s point of view. On seeing this drawing, Drewes said he was ‘deeply impressed by Robert’s unrivalled artistry and insight’. Both men went on to sign the limited edition print of Robert’s painting and are now also featured as part of this highly-restricted Masterwork edition.

Only 25 copies of this high quality giclée fine art print are available worldwide through the Military Gallery, Robert’s exclusive publisher for more than forty years. Remembering the duels that took place in the night skies over Europe during the Second World War, each print is issued mounted to full conservation standards as the centrepiece of this release to include the original autographs of both RAF Lancaster crews and Luftwaffe night-fighter veterans.

The Signatures - with TEN signatures!

Joining artist Robert Taylor in signing every print are two highly regarded aircrew who flew Lancasters with RAF Bomber Command during WWII. To make it even more special, each copy is matted to include the original autographs of a further three WWII Lancaster aircrew and five Luftwaffe Me110 night-fighter pilots, all of whom flew in combat over Europe during the Second World War. The full list of signatures reads: