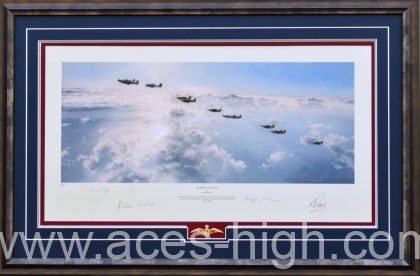 ''If you had the height, you controlled the battle. If you came out of the sun, the enemy could not see you. If you held your fire until you were very close, you seldom missed’'

These three basic rules contributed to the prowess in aerial combat of some of the most successful fighter pilots in history and seldom were they more valuable than when outnumbered.

In Robert Taylor’s outstanding painting, Hurricanes of 32 Sqn climb high into the morning sky, gaining Height and Sun in an attempt to take the advantage over the onslaught of enemy fighters - August, 1940. The brave young pilots of RAF Fighter Command were under intense pressure from the constant attacks of the Luftwaffe and the Hawker Hurricane was the machine of the Battle of Britain, accounting for 80 percent of Allied victories.

The print is framed to full conservation standards to include a replica RAF Sweetheart breve and is signed by THREE famous fighter pilots who took part in the Battle of Britain: