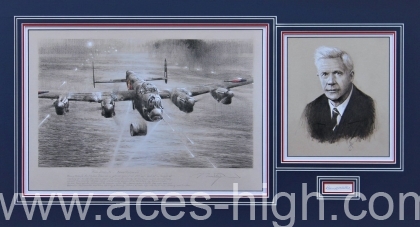 The second in this outstanding series of transformative works of art from the world’s most widely collected Aviation Artist...

Following the runaway success of ‘The Red Baron’, the first release in Robert Taylor’s Icons of Flight Collection, a compilation of ground-breaking artworks dedicated to some of the most famous aviators in history, we're delighted to announce details of the second piece in the series. It features Sir Barnes Wallis, one of the most brilliant aviation designers the world had ever seen and the man who invented ‘Upkeep’, the codename given to the cylindrical, hydrostatic bouncing bomb he conceived to destroy the great dams of the Ruhr that supplied water to Germany’s industrial and manufacturing heartland during WWII.

On the night of 16 /17 May 1943 three primary dams – the Möhne, Eder and the Sorpe – were attacked during Operation Chastise, one of the most daring precision raids of the Second World War. Carried out by the specially-formed 617 Squadron – soon to be known as the Dambusters – nineteen Lancaster bombers under the command of Wg Cdr Guy Gibson were tasked for the raid. But to deliver Barnes Wallis’s weapon each aircraft, modified to carry a single Upkeep bomb, must be held at exactly 60ft above the water some 400-450 yards from the target, and at an airspeed of 210mph. With heavy flak expected en-route and over the target it would be a dangerous task, and so it proved – of the 133 airmen who set out from RAF Scampton only 77 returned.

The centrepiece of this Icons of Flight portfolio features a stunning new drawing entitled First Assault – Bomb Released. A classic Robert Taylor masterpiece, the image portrays Lancaster AJ-G heading towards the Möhne Dam. With Guy Gibson at the controls holding the bomber steady under intense enemy flak, his bomb aimer successfully releases their spinning ‘Upkeep’ mine which will hit the dam wall, sink and detonate, sending a towering column of water high into the air. After several similar hits the Möhne would be breached, as was the Eder in what soon became one of the great morale-boosting raids of the war. Alongside is a second, completely separate work – an insightful head and shoulders portrait of Barnes Wallis himself.

Both drawings are reproduced as highly-restricted Giclée proofs printed by one of Europe’s most respected Giclée master printers who, with over a decade of experience, create their proofs to the highest European standards of certified digital print-making. Both drawings are reproduced on museum quality archival papers, but the next stage is unique as the artist himself takes over proceedings. Personally transforming each of the matching proofs into individual works of art through the delicate application of subtle embellishments, elegant highlights and refined tonal applications of muted colour wash that it is only when Robert is entirely satisfied with the finished result, he titles and captions each work before signing and hand-numbering each of these individual and unique pieces.

Every portfolio is completely unique – no two are embellished the same!

In recognition of Barnes Wallis’ remarkable contribution to the raids against the great dams, only 19 copies of this memorable edition are available worldwide representing the 19 aircraft that took off from RAF Scampton on that fateful night. Each pair of drawings is exquisitely matted to full conservation standards in a single composition that includes a RARE and fully authenticated original autograph of the man himself;

The portfolio is then completed with a matching-numbered and exclusively produced copy of the book THE GENIUS OF SIR BARNES WALLIS with paintings and drawings by Robert Taylor.