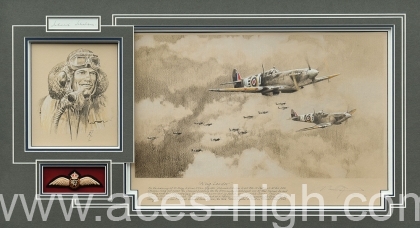 Part of Robert's Icons of Flight series  – every copy is completely unique and no two are embellished the same!

Robert Taylor’s highly popular Icons of Flight series has seen editions featuring such legendary names as ‘The Red Baron’, ‘Barnes Wallis’ and ‘Douglas Bader’ and we’re sure that this stunning portfolio will be equally as popular as it features one of the most respected fighter pilots of all time, ‘Johnnie’ Johnson. With 38 victories to his credit not only was Johnnie the highest-scoring Spitfire Ace of the war and the most prolific RAF pilot against the Luftwaffe but, in some 1,000 combat missions, he was never shot down, and only once was his Spitfire damaged in action.

Johnnie and artist Robert Taylor enjoyed a long-standing friendship that continued until the great Ace sadly passed away in 2001. Always a great admirer and supporter of Robert’s work and readily on hand to authenticate the artist’s meticulous research, Johnnie was an enthusiastic signatory on many of Robert’s most famous pieces including Eagles High, Return From Schweinfurt, and St. Croix-sur-Mer, titles listed as some of the most collectible aviation art prints of all time.

The centrepiece of this highly-restricted edition features a detailed drawing entitled Wing Leader, beautifully created in a style that few can match, portraying Johnnie leading the Mk.IX Spitfires of his 144 Canadian Wing out across the Channel as they head for the Normandy beach-head on the morning of D-Day, 6 June 1944. During the day, with the cloud base down to 2,000 ft., Johnnie and his Wing made four trips across the Channel to provide air cover over the beaches being assaulted by British and Canadian troops. Four days later, on 10 June, Johnnie’s Canadians landed at a hastily-constructed temporary airstrip near the village of St. Croix-sur-Mer just behind Juno Beach. They were the first Allied fighters to land in France since 1940.

Alongside Wing Leader is a second, completely separate matching-numbered piece – a head and shoulders study of Johnnie.

Both drawings are meticulously reproduced as Giclée proofs by one of Europe’s most respected Giclée master print-makers on museum quality archival papers. What happens next is at the heart of Robert’s ground-breaking series; it is the artist himself who now takes over proceedings, transforming each of the proofs into individual and unique works. He does this through the delicate application of subtle embellishments, elegant highlights and refined tonal applications of muted colour wash and only when he is personally satisfied with the finished result, does he title and caption each work before signing and hand-numbering each of these special pieces.

Only 25 copies of this impressive edition are available worldwide. Each pair of drawings is exquisitely matted to full conservation standards in a single composition that includes museum-quality reproduction RCAF wings and an ORIGINAL and fully authenticated autograph of the legendary pilot depicted:

To complete the portfolio, each compilation is accompanied by a matching-numbered biographical book specially written for the occasion which is beautifully illustrated by Robert Taylor and his talented son, Richard.