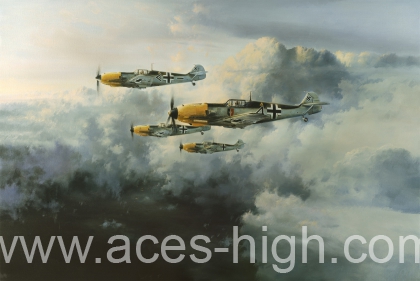 A Schwarm of Bf109s from JG-52 are about to peel away and, with the battle-cry ‘Horrido!’ ringing in their ears, dive to attack the flight of enemy aircraft spotted below.

JG-52: the name alone brought terror into the hearts of the Red Air Force pilots. By the end of the war the Luftwaffe’s most successful Geschwader had claimed over 10,000 victories, and from within its ranks emerged the top three scoring Aces in the history of air combat; Gerhard Barkhorn, Gunther Rall and, of course, the highest scorer of them all – Erich Hartmann.

One of the few Luftwaffe units to fly the Bf109 exclusively throughout the war, JG-52 spawned some of the most talented fighter pilots to take to the sky, honing their skills as they were joined by older, more experienced Aces, legendary names such as Batz, Graf, Steinhoff, Hrabak, Krupinski and Obleser.

Robert Taylor’s legendary painting, JG-52, is widely recognized as one of the most iconic depictions of the Luftwaffe’s most famous fighter wing and the original print edition, published in 1986, was personally signed by many of those famous Aces and rightly commands high prices on the secondary market. Those prints and original signatures can of course never be replaced; however this famous image is now available as a Masterwork on canvas.

Thanks to the latest high-definition digital technology, this iconic image is available as part of Robert’s series of Giclée Canvas Proofs. Specifically produced to order, each copy is signed by the artist, individually numbered and stamped on the reverse, and issued with a Certificate of Authenticity.

Due to demand from collectors, JG-52 is available in two different sizes – the full size STUDIO PROOFS and a smaller FOLIO PROOF format.

Each individual canvas is printed to the same exacting standards and under the direct supervision from Robert himself. He has described the outcome as ‘stunning, and as close to my original painting in both colour and texture as I believe is currently possible’. High praise coming from the world’s premier aviation artist! Every canvas is issued personally signed by Robert on the front and stamped on the back to fully authenticate.