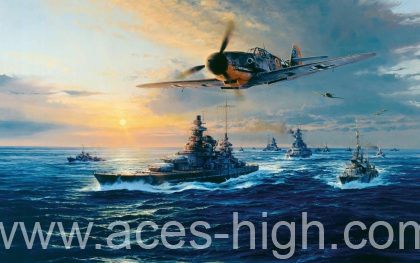 At dawn on 12 February 1942 a German battle fleet rounded the Cherbourg peninsula. Their destination was Germany.

Undetected, the battlecruisers Scharnhorst and Gneisenau, together with the cruiser Prinz Eugen and supporting vessels, had escaped from the French port of Brest, and were making an audacious dash - in broad daylight and under the noses of the enemy - to the safety of the Elbe Estuary. But first they must sail through the Straits of Dover, one of the narrowest and most heavily defended straits in the world.

Everything depended on surprise - and air cover. Given the job of providing that air cover was one of Hitler’s youngest Generals, Adolf Galland, and his Messerschmitt Me109's of JG-26.

Never, perhaps, has such a significant air-sea operation been portrayed with such style as by Robert Taylor in the now classic Masterwork, The Channel Dash. Originally created as the first in the famous ‘Galland Trilogy’, The Channel Dash, signed by Adolf Galland and veterans of Operation Cerberus, became one of the most collectible limited editions ever published.

It is fitting therefore that it is the now enhanced by the creation of a GICLÉE STUDIO PROOF ON CANVAS.

Every Channel Dash Giclee Canvas Proof is issued with a facsimile photograph of General Adolf Galland taken during WWII, which has been beautifully matted to conservation standards to include a reproduction Luftwaffe Fighter Pilot’s clasp and Galland’s ORIGINAL signature.