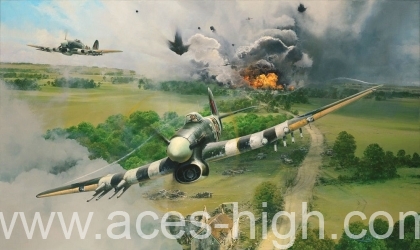 Typhoon Mk1b fighter-bombers of 247 Squadron exit the target area near Falaise at full throttle, wreaking devastation with their powerful rockets as fuel and ammunition from the retreating German column explode with shattering force. The Typhoons will hurtle back to base to re-arm and hastily re-fuel, ready for yet another withering strike on the encircled Wehrmacht columns.

In our opinion this superb edition from the worlds most collected aviation artist, is quite literally one of the best images he has ever produced.

Robert has only once before depicted the Typhoon and in his usual unsurpassed style he captures perfectly the raw power and sheer ferocity of these awesome aircraft as they wreak havoc amongst the German artillery during the famous Battle for Normandy. As a lasting tribute to the brave young RAF Fighter Pilots of the twenty squadrons of rocket-firing Hawker Typhoons who flew those perilous ground attacks during the invasion, and with a possible FIFTY signatures available in the edition, CLOSING THE GAP continues to prove hugely collectable amongst aviation specialists.

Every print in this edition has been signed by three hugely respected RAF Typhoon pilots who flew and fought in the skies over Normandy along with the artist Robert Taylor, and hand-numbered.

In addition to the pilots signing the limited edition, each print in this remarkable TEN signature Typhoon Edition is also signed by the following distinguished Typhoon fighter pilots.

This impressive edition commemorates both the British Air and Land Forces who fought so valiantly in the grueling Battle of Normandy. Joining the ten RAF fighter pilots on the Typhoon Edition, each print is additionally signed by ten British Army veterans who fought in the Normandy breakout, making a total of TWENTY signatures in this edition.

The following six Knight’s Cross holders have each signed an original and unique pencil drawing by Robert Taylor. Robert’s superb portrayal of German armour, coupled with a total of TWENTY SIX signatures in the edition limited to just 15 copies, represents a wonderful opportunity for all serious World War II collectors.

In the history of armour the name of Michael Wittmann is unsurpassed, and his signature highly collectible. The rarity of these FIVE Tribute Proofs comprising an original pencil drawing by Robert Taylor signed by twenty-nine Panzer tank commanders and crew who hold Germany’s coveted Knight’s Cross, and matted to include the authentic signature of Michael Wittmann is also unsurpassed. Add a copy of Robert’s limited edition signed by twenty RAF and British Army veterans and this is without doubt one of the most exclusive editions ever offered.