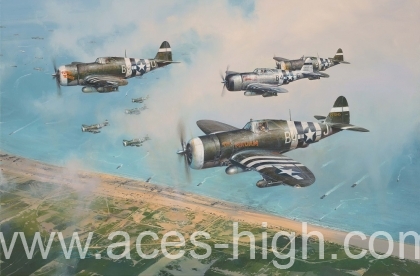 AN OUTSTANDING EDITION TO COMMEMORATE THE 70th ANNIVERSARY OF D-DAY

As elements of the US VII Corps storm ashore on Utah beach below, P-47D Thunderbolts from the 365th Fighter Group, US Ninth Air Force - The Hell Hawks - overfly the Normandy bridgehead on the morning of D-Day, 6 June 1944. Flying from their base in southern England, the mighty Hell Hawks head inland to attack and successfully suppress German positions in support of the American advance.

Continuing in his series of D-Day Anniversary editions spanning thirty years Robert Taylor has created a stunning masterpiece to commemorate the 70th Anniversary of one of the greatest Military operations in history.

The prints in this outstanding edition are personally autographed by Pilots who flew with the legendary 365th Fighter Group - The Hell Hawks - over D-Day and Normandy.

Each print is individually numbered and personally signed by the artist and TWO highly prominent Hell Hawks Pilots:

With all the components of the Limited Edition each print in these ELEVEN signature editions is issued with the exclusive matching-numbered companion drawing - PLANS AND PREPARATIONS - which is also individually numbered and personally signed by the artist and further highly respected Hell Hawks pilots:

A very limited number of prints in this edition will be returned to Roberts studio to be enhanced with a specially created original pencil drawing in the lower margins of the print, making these amongst the most sought after pieces in the industry.

This rare and historic tribute to the men of the Hell Hawks is released with all the elements of the Collectors Edition. This exclusive THIRTEEN signature tribute is accompanied by an ORIGINAL pencil drawing individually created by Robert Taylor. Each beautifully executed drawing is conservation matted and additionally hand-signed by two further Hell Hawks Pilots: