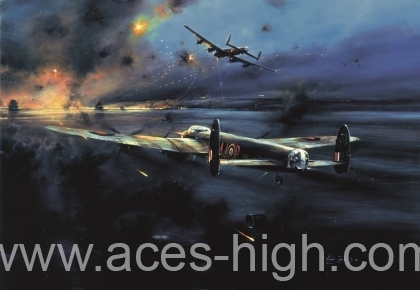 On 16th May 1943, the crews of 617 Sqn were about to embark on an audacious low-level assault against the great dams of Germany. Codenamed Operation Chastise, the task required exceptional flying skills and a specially designed ‘bouncing bomb’, but if the dams could be destroyed it would deal a massive blow to the Nazi war machine.​

The first and original Dambuster release from Robert, in which Mick Martin is depicted releasing his bouncing bomb and heading through the defensive curtain of gunfire provided by the German forces. Guy Gibson's aircraft is flying directly in front of Martin's in an effort to distract the flak, in spite of this Martin collected a shell right through a starboard wing tank, but his bomb scored another direct hit. Gibson and Martin then flew in with each of the two successive attacks either distracting the defences or attempting to suppress them with fire from their own air gunners. The cumulative effect of the fourth direct hit breached the Dam and 150,000,000 gallons flooded the Ruhr valley washing away factories, railway bridges, electric pylons, but above all greatly reducing water supplies so necessary to the armament industrial processes.

The Dambusters is signed by Australian Dambuster and well renowned pilot: