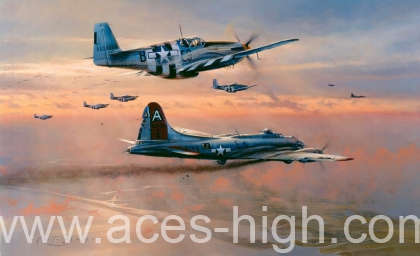 On July 20th it was the turn of the 91st Bomb Group to attack an airfield near Leipzig, suspected of harboring the new menace - the Luftwaffe's revolutionary Messerschmitt Me262 jet.  As the formation spread out for the bomb run, the 401st squadron took the low position - the most vulnerable to fighter attack.

Just as the crew of The Peacemaker steadied the ship to sight the target, the squadron was set upon by Focke-Wulf 190s.  The formation leader was set on fire wingtip to wingtip, almost colliding with Peacemaker as the stricket aicraft slid into the void below.  At that moment, cannon shells ripped into Peacemaker as a Fw190 flashed past within 200 feet, its guns blazing.  Hit in the wing and tail, the bucking B-17 began to slip below the rest of the formation.  She was a long way from home.

Robert Taylor's dramatic portrayal picks up the story as the injured bird limps towards the sanctuary of the English coast.  That she has gotten this far is a miracle, due in no small part to the close attentions of escorting P-51B Mustangs of the 361st Fighter Group.

To keep her flying, the crew jettisoning everything that can be safely bundled out of the aircraft.  The front hatch is open and bombardier Marion Havelaar has reluctantly despatched his 20lb bomb sight to the ocean below - for him, an act of total sacrilege.  The Peacemaker made it back to Bassingbourne that day; eight others did not.

Each print in this edition has been hand signed by the Artist along with aircrew personally involved in bringing ‘The Peacemaker’ home, and in fighter escort: