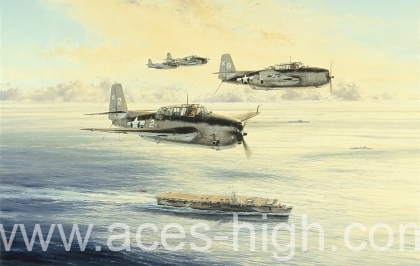 On 9 June 1943, three days before his 19th birthday, George H.W. Bush was commissioned as an Ensign in the United States Naval Reserve to make him one of the youngest aviators in US Naval history. Posted to the USS San Jacinto (CVL-30), a cruiser converted during construction into a small light carrier, George Bush flew his first combat mission in a raid over Wake Island on 23 May 1944, and continued to serve with distinction until the end of hostilities against Japan. During that time the man who would later become the 41st President of the United States logged over 1,220 flying hours, made 126 deck landings, flew 58 combat missions and was awarded three Air Medals.

One of those missions was almost his last; on 2 September 1944, during an attack on Japanese radio installations at Chichi-Jima in the Bonin Islands, his aircraft was hit by intense ground fire. In spite of the flames and dense smoke filling the cockpit, George Bush pressed home the attack before guiding his stricken aircraft out over the sea and baling out. Although both his fellow crew members sadly perished, Lieutenant Bush survived in a dinghy and was rescued by the USS Finback, a submarine. For his heroism during the raid he was awarded the Navy’s Distinguished Flying Cross.

Originally published as a Limited Edition print in 1988, Low Holding Over The San Jacinto remains one of Robert Taylor’s most sought-after pieces. The image portrays a scene from August 1944 with Lieutenant (JG) George Bush as part of a four-plane formation of TBM Avengers from Torpedo Squadron 51 (VT-51) flying a low-holding pattern in preparation for landing aboard the carrier. The edition was personally signed by George H W Bush and, needless to say, copies of that original edition are extremely rare and highly sought-after.

Now, thanks to the latest high-definition technology, this wonderful image is available as part of Robert Taylor’s hugely popular series of artist-signed giclée canvas proofs, creating the look and feel of the original painting.

It is available in two different sizes: